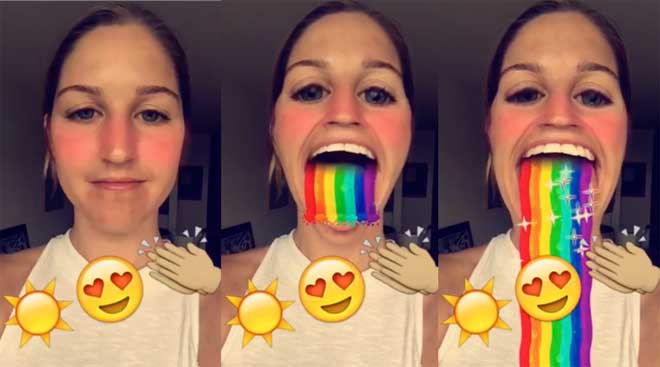 The folks at Snapchat have been very busy this year. This time around they have released their third Snapchat Update for 2015. Reports on the previous two updates this year can be found here and here.

The update was announced in a company blog post. First off, Lenses a new feature has been introduced which makes the selfie-taking experience fun(ner) for the Snapchater. Lenses work when a person takes a selfie through the front-facing camera of his or her mobile device and then clicks down on his face. This will initiate a number of fun animations which will transform and change your photos and videos. The Lenses are interchangeable and work like Instagram’s filters.

These Lenses are a few of our favorites; Heart eyes (Hearts shoot out of your eyes when you lift your eyebrows), Terminator (Turns the screen to a robot’s heads up display and when you lift your eyebrows a ‘DANGER’ alert will show),  Puke Rainbows (A flood of rainbows will come out of your mouth), Old ( Turns your face old and wrinkly), Scary (On opening your mouth the screen will go black and white and your face will become demon like), Rage Face ( On opening your mouth the screen will zoom in and make your eyes googly and expand your mouth), Heart Avalanche (Open your mouth and you will be attacked by, what else?, a heart avalanche). According to the Snapchat team, even more Lenses will be added in time and one Lens will be added and one will be removed each day.

Snapchat has also introduced another feature, which has angered a lot of their fans. As of 15th September 2015, all American users of Snapchat will be able to purchase extra replays of videos and pictures. These will all be considered as In-App Purchases and will be priced according to the number of replays being purchased. Three replays will be priced at $0.99, ten will be for $2.99 and twenty will be for $4.99. These Replays can only be used once on a single picture or video.

Trophies feature which was quietly added in the previous updates has now been highlighted. These include virtual rewards which will be handed out according to your use of the application.