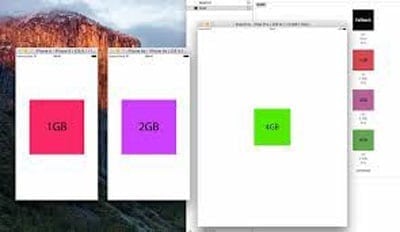 Apple’s development tool Xcode has now confirmed the specifications of the newly announced Apple products. Hamza Sood, an iOS developer from the UK, used asset catalogs within the Xcode 7 GM to confirm the details about the specifications of the devices. Using these measures he confirmed that the Apple iPhone 6s did indeed upgrade it’s RAM up 1 GB from the 1 GB of the iPhone 6. The iPad Pro has had a surprisingly 100% increase to it’s GB from 2 GB  to 4 GB with the A8X chip.

Sood also explains how he managed to hack Xcode’s catalogs to get the information about the device specifications. Normally asset catalogs serve different images for 1x, 2x and 3x screen scales but Sood set the image asset to choose based on the memory capacity of the devices.

People have been hankering for a RAM update for quite some time. The RAM of a device affects the app data that a device can keep in the memory at a particular time. So more RAM would mean that the system of the iPhone 6s would be smoother and run better as the iPhone has been using the 1 GB RAM for almost 3 years now. Apart from the leak concerning the RAM of iPhone 6s and iPhone 6s Plus leaks have also hinted to the fact that the mobile devices might also contain a quad-core processor compared to the dual core compressor of the previous models.

Adobe leaked the specifications for the new iPad last week in a press release for the Creative Cloud which stated that iPad Pro has 4 GB of RAM. Sadly, the mention was removed just a few hours later. For the iPad users, a better and bigger RAM means better split screen multitasking. Applications on the iPad Pro will also be more capable and will be able to do things like edit large video streams and keep more apps ‘frozen’ in memory. The iPad Pro has an A9XSoC processor, which is purportedly 1.8 times faster than the previous processor.

iPhone 6s and iPhone 6s Plus are available for pre-order now.