Photos courtesy of Wikipedia and The New Yorker

The following article by Tynker was originally published on the Tynker Blog on May 22, 2018. It is being republished here with the publisher’s permission through syndication.”

Most of us don’t go a day (or, let’s be honest, an hour!) without using Wi-Fi, GPS, or Bluetooth – but chances are you didn’t realize that Hedy Lamarr, best known for her 1940s film career, was the woman behind it all.

Deemed “the most beautiful woman in the world” by MGM – but quoted saying that “the brains of people are more interesting than the looks” – Hedy made incredible contributions to both military technology and the tech that is ubiquitous in our lives today. We can thank Hedy for our ability to surf the web, chat on the phone in the car, find our way to the store, and more! With her “Secret Communications System,” now a $30 billion technology known as frequency-hopping, she laid the foundation for Wi-Fi, GPS, and Bluetooth.

Hedy, born “Hedwig Kiesler” in Vienna, began her acting career in Berlin in 1930. After meeting the head of MGM in Paris, she changed her name to Hedy Lamarr and moved to the US in 1938, just before the start of World War II. Hedy continued to excel in her acting career – she starred in several Oscar-nominated films as well as the highest grossing movie of 1949, Samson and Delilah– but she also led a double life as a phenomenal engineer and inventor.

Though she left school at age 15 and was never formally trained as an engineer, Hedy had a passion for engineering. “Inventing was her hobby,” Alexandra Dean, who directed the biopic Bombshell: The Hedy Lamarr Story, told Vanity Fair. “It was her reflex. It was how she dealt with the problems of the world. And she did it in such a quiet way that most people around her didn’t even know.” 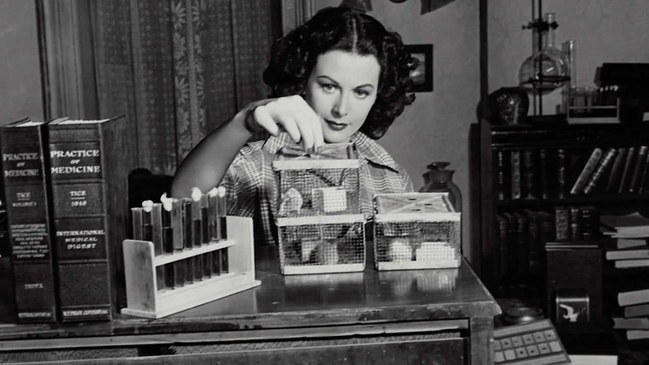 After work at the drafting table in her home – or in between takes in the designated engineering corner of her trailer – Hedy developed hundreds of ideas and inventions. Her brilliant ideas ranged from a tablet designed to change water into Coke, an improvement on traffic lights, and even a pair of reimagined wings for a fuel-efficient plane for Howard Hughes! As her son Anthony Loder told CBS, “She was such a creative person…nonstop solution-finding. If you talked about a problem, she had a solution.”

How did she do it all without a formal education? In her words, “I was different, I guess. Maybe I came from a different planet. Who knows. But whatever it is, inventions are easy for me to do.”

Hedy’s greatest invention, the “Secret Communications System,” came during the summer of 1940. From Hollywood, she listened to stories of the atrocities inflicted on her fellow Austrian and Jewish populations. She was determined to do something.

A chance meeting of Avant garde musician George Antheil at a dinner party led to a collaboration in which the two used player piano technology to create frequency hopper technology. Their goal was to protect Allied Navy ships by preventing the interception of torpedo transmissions. The idea was this: rather than using just one frequency to send radio messages, use many different frequencies for each message. According to PBS, the sending and receiving stations would have the same pattern prepared, so they were synced and ready for messages. They used 88 different frequencies for the 88 keys on the player pianos!

Lamarr and Antheil saw their idea through and ended up with a working frequency-hopper. When Hedy proposed their invention to the Navy, they turned their “Secret Communications System” down; however, the Navy began using her technology in the 1950s to their benefit about a decade later.

Not only did Hedy’s invention contribute to the future of the military, but frequency-hopping became part of “spread spectrum,” integrated into many of the technologies we use today. Experts estimate that her invention is now worth an astounding $30 billion. In 1997 at age 82 Hedy was, at last, recognized for her work when the Electronic Frontier Foundation honored her with two awards for frequency-hopping.

What can we learn from Hedy? As a woman in STEM, she ran into a lot of barriers – but she persevered. Her son Anthony recounted a poem she read him often, in which she urged him to “give the world the best you have” regardless of how his “best” is received. Hedy’s message of resilience is clear; though many didn’t recognize her genius, she never gave up – and she changed the world as we know it.

Let’s encourage every girl to give the world the best she has! With Tynker, they’ll harness their creativity, build resilience, and become, as Hedy would say, “inventors.”

BluetoothgpsinventionWi-Fi
Previous ArticleiPhone X vs. Android Notch: What’s The Difference?Next ArticleWWDC 2018 – All About The Software iOS 12 And More