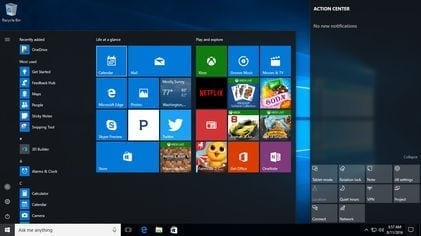 The Most Compatible Windows OS

Windows 7 has been loved by millions of users across the globe, including me. According to Microsoft, Windows 10 is taking its place. Adoption of the latest Windows OS has been slow but steady. It has been debatable how much people like it, or not. Even though, widespread acceptance of the latest Windows OS is inevitable. According to Microsoft, Windows 10 is its most compatible OS to date.

In a presentation on Digital Transformation within IT departments at NexTech Africa, the following numbers were revealed about Windows 10’s compatibility.

Technically, if something runs on Windows 7 and 8, it should run on 10 as well. You can always use the “compatibility mode” to make an application think it’s running on an older operating system. Windows 10 will usually perform this action itself but you can also enable these compatibility options by right-clicking an application’s .exe file or shortcut, selecting Properties, clicking the Compatibility tab, and selecting a version of Windows the program worked properly on.

An application or hardware that requires an old driver will most likely be a problem especially if the manufacturer never provided a working driver for Windows 7. On the other hand, if you have a hardware driver that worked on Windows 7 it most likely will work on Windows 10 as well.

All programs that worked on Windows XP won’t work on Windows 10 anymore, which almost everyone understands now. You can find out if an application is compatible by using the Upgrade Advisor. The name might be familiar to you as this used to appear on Windows 7 and 8 as “ Get Windows 10”, which compelled you to upgrade.

You can always contact Customer Support for the company that offers a particular application and ask if your app would run on the latest Windows 10 or not.