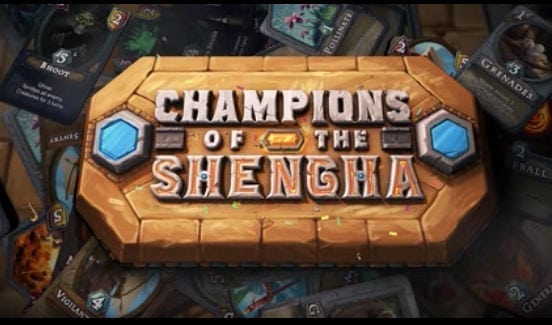 Indiegogo introduces an emotionally responsive video game known as, “Champions of the Shengha: Play with your emotions. Make meditation magical in a card battling game which senses your emotions”.

The benefit of Champions of the Shengha includes helping people to regulate their emotions. This also helps with reducing levels of stress as well as anxiety.

The game responds to a player’s emotions and rewards those who can master them. “Champions of the Shengha” is a fantasy card battling game. In each round, you are challenged to summon your inner strength and control your emotions. This is what determines how well you do in the game. The better that you can stay focused in real life the better spells, weapons, creatures and armor you have to defeat your opponent. An ear clip sensor measures user’s emotional state by tracking their heart rate variations.

In trials of the game from BfB Labs, the company found that 80% of players who applied skills learned from the game did so in their real life as well. We are able to increase their level of emotional control and education officials are already praising the benefits of the game.

“We need healthy, creative, and resilient children who know how to maintain wellbeing and can manage stress. It is essential that we find ways of engaging young people with their technologies”, said Charolette Berry from the Billericiay School.

You get to play with people around the globe, defeat them to be the CHAMPION. Once you become the Champion you get to make your own tribe “the world’s greatest magical force.”

The three tribes that you can choose from include Fear, Fury, and Joy.

Your cards can be brought to life by simply utilizing your “ability to focus your will” which is measured by the BfB sensor.

What Can You Do in Champions of the Shengha?

Once you start competing in duels, which makes you fight people from around the globe, you get to build your own deck. Make your Creatures colorful and equip them with the best of Armour as well as Weapons. Be careful about building unique decks that would distinguish you from the other competitors.

One of the most interesting features involves casting “spells.”  These are basically cards that are powerful enough to inflict serious damage upon your opponent, or even heal the wounded.

Next up is summoning creatures; powerful spellcasters are able to do those themselves.

It’s hard to get all that you can do into one discussion so you can check out all the other things you can do for yourself.

How does Champions of the Shengha combat stress and anxiety?

HRV or Heart Rate Variability is measured through a Bluetooth ear clip. HRV is known as the marker of both stress and anxiety.

The players HRV is reflected back to the player and as a result, they learn to master the skill of raising it through the process of breathing and exert control over the methods by which they respond to stress.

Trials have proven this claim of the game so far, so it’s definitely worth a try!  Single player packs are available on Indiegogo for a $50 a pledge.

Available on both Android and iOS