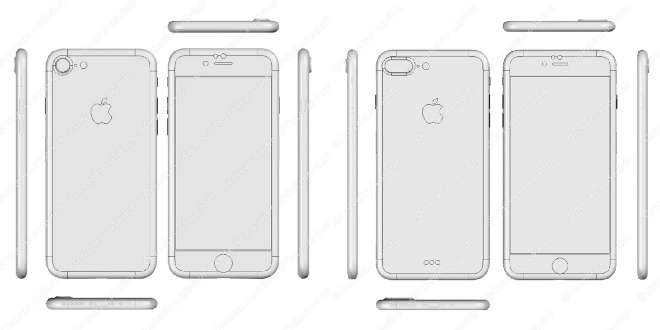 Latest Schematics For iPhone 7 And 7 Plus

Once more, a basic layout of the iPhone 7 has been unveiled, this time of both the 4.7 inch and 5.5-inch models. Unlike before, in the new schematics for iPhone 7, a clearer side view can be seen.

As mentioned in rumors about the general appearance, these concepts back the suggestion that the next iPhone would most likely resemble the iPhone 6S. Some features, however, appear modified as the blueprints suggest. For both models, it seems the headphone jack being absent is close to true. Among all rumors, hardly any say otherwise. Although, the topic still remains debatable. Following the audio jack rumor, these schematics don’t show the iPhone having the dual-speaker system. This seems to be a let-down for most because the space for the audio jack could be covered by adding a second speaker. It still remains uncertain, though. Next, the rear design for both appears cleaner than the currently known iPhone models, possibly making them more smooth and sleek. Though, that may be an overlooked specification while generating these blueprints.

From the side angles of both models, a minor, continued flaw is noticed upon closer inspection. The camera bump which had been an inherited design flaw for iPhone 6 last year and iPad Pro this year. Though unconfirmed, this design suggests it would remain for at least another year.

In the smaller iPhone 7 concept, the camera aperture diameter is slightly larger, while being notably closer to the border of the design. This continues and supports the earlier speculation of it having an extra sensor in the camera.

As for the larger model, the design shows a unique aperture for the camera lens, possibly suggesting the rumors for the dual cameras to be unique to this model being true. Another feature seen in the rear view image is the three small apertures, most likely, for a Smart Connector at the lower end. While it remains a rumor, for now, there hasn’t been a single iPhone sporting a Smart Connector. If these schematics end up true then it would make iPhone 7 Plus the first iPhone to have a smart connector.

These designs still only support rumors, but so far this is all there is to know about the next iPhone generation.