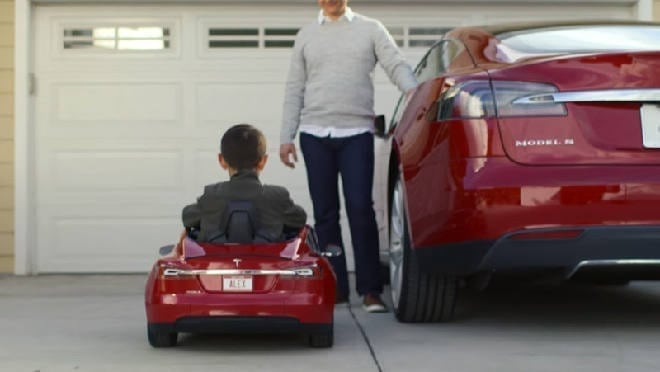 The Tesla Model S was undoubtedly one of the most advanced and coolest pieces of technology of our time. Elon Musk has created a new type of vehicle through his brilliant and elegant technologies. Some even call him the real-life Iron Man. But one company has decided to bring those same characteristics to kids in a new case using an old strategy.

If you were a kid in the past 10-15 years, one of the coolest things to have was one of those mini-cars that run on removable batteries. Or maybe you had a mini moto which was just as awesome, if not better. I felt like one of the coolest kids on my block riding in my brand new Jeep Wrangler with shiny rims and stereo system (of course I wouldn’t learn how to drive an actual car until years later). This feeling has been lost for a while with the decline of battery-powered minicars over the last few years. Kids would rather sit and play with their phones nowadays.

In an effort to revive those good times, Radio Flyer, creator of the Little Red Wagon, has created the Tesla Model S for kids. This new one-seater for kids 3-8 years old uses a powerful lithium battery, which is, on average, three times better than the lead-acid batteries used on other mini cars, to bring a modern form of fun to kids. This battery charges almost identically to a Tesla. You just plug in the charger on the side of the rear left taillight, just like you would do with a full-sized Model S. This battery allows the car to reach speeds of up to 6 miles per hour.

The Tesla for kids comes in its Tesla-branded colors: Red, Deep Blue, and Midnight Silver. The car even comes with its own stereo system where the driver can plug in his/her device to listen to his/her music. The dashboard of the car looks very similar to the original Model S and shares the same wheel design, showing off a large Tesla logo in the center. The same ‘frunk’ (front trunk) is used and beautiful LED headlights allow for nighttime driving.

You can customize the rims, the battery, the color, and the license plate, all on their website. A premium battery will cost $50, a license plate (up to 8 characters) will cost $15, a car cover is $50, and a parking sign (up to 10 characters) is $25. The car itself, with a standard battery and black rims, costs $499.

Overall, I find this to be insanely awesome and really cool. I would buy one for myself if I could still fit in one of those mini cars. But who knows, maybe I’ll find myself in a real one in the not too distant future.