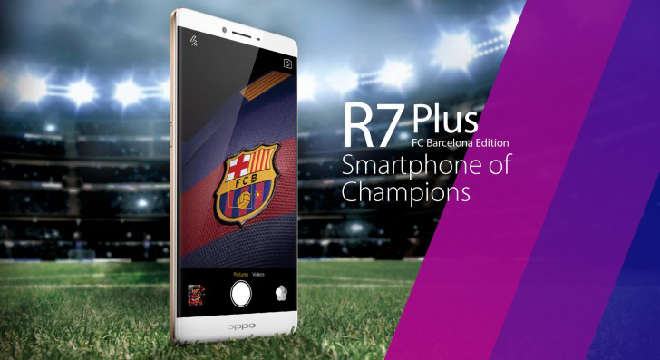 One of the things that almost all people love is competition. Whether it be a friendly game of chess, an Olympic swimming race, or the World Cup Final, humans strive to win over others. Over the past decades, sports have become a universal way for one to show his love and pride for his city, state, nation, and even continent. Probably the most loved of these sports is soccer. Soccer has shown its ability to bring people together, ignoring gender, race, ethnicity, skin color, culture, and traditions.

Arguably, the most known soccer team in the world is FC Barcelona. The Spanish soccer team is the employer to some of the biggest names in soccer including Neymar, Messi, Suarez, and many others. They have worldwide recognition and support from children to adults. Companies, like Adidas, have made soccer balls, shirts, hats, and now phones.

R7 Plus from Oppo

The R7 Plus from Oppo is an FC Barcelona-themed smartphone that has been created in partnership with the Catalonian soccer team. The phone sells for $599 and comes with a Barcelona Fan Kit. The Fan Kit includes several items of Barcelona merchandise such as a selfie stick, an Oppo R7 wallet case, a 4100 mAh VOOC power bank, and an FC Barcelona water bottle. The phone is branded with the FC Barcelona and the Oppo logo on the back of the phone in a metallic finish.

The Barcelona-themed Oppo ColorOS 2.1 (based on Android 5.1 Lollipop) software is run by a Qualcomm Snapdragon 615 MSM8939 Octa-Core 1.5GHz chip, 3GB of RAM, 32GB of expandable storage, with a 4100 mAh Li-Po rechargeable battery. The Gorilla Glass AMOLED 1920×1080 ppi screen comes in a 6-inch size on a golden body. The phone stores a 13-megapixel rear camera that’s capable of shooting up to 4K video and an 8-megapixel front-facing camera (great for using it with that stylish selfie stick).

For that Messi-lover in you, the FC Barcelona Oppo R7 Plus is a great choice for a smartphone. The phone’s body and modified software stay true to the nature of the Red and Blue stripes. The golden accents greatly bring out the champion spirit of both the phone and FC Barcelona.