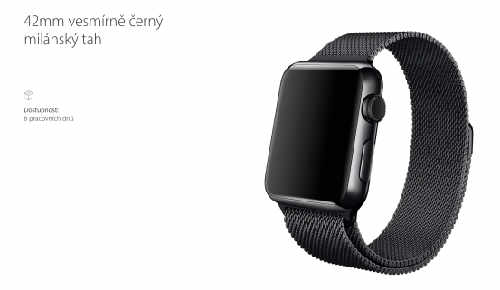 A new strap? Apple is now ready to launch a new brand of the Apple Watch band which is a 42 mm Space Black Milanese Loop. It is most probably going to be paired up with the Space Black steel model of the Apple Watch. Even though third party aftermarket black Milanese loops have been offered for sale for a long time, this loop is most important because it is Apple’s first and only official band which matches with the Space Black Link Bracelet, both in its color as well as quality.

We are also bound to tell you that even though Apple made no express official announcement about this new band color nevertheless this new band first appeared on Apple’s webpage for The Czech Republic on the 6th of January 2016. This picture appeared right after the availability of Apple Watch for The Czech Republic region was announced. This band was also seen by some on both the Apple store website for Portugal and Hungary regions. There is no longer an official ‘buy button’ on the page.

The listing on the store did not show anything other than the photos of the band. The description of the Apple Watch is the same as that of the normal version of the Milanese band and according to the shipping date, these bands will be available for shipping after one week. This spotting of the band may have been a result of a sort of mix up and perhaps the Space Black Milanese Loop band will not be offered to consumers anytime soon.

The regular version of the Milanese Loop strap is currently on sale for $149.

It should also be noted that recently Apple announced that it will offer two new models of the Apple Watch by the Chinese New Year. So will we be able to see the Space Black Milanese band in the market anytime soon? No representative from Apple could be reached to answer this question.

Update: The link to the Space Black Milanese Loop band has now been completely removed and the page now redirects to the stainless steel option of the band.