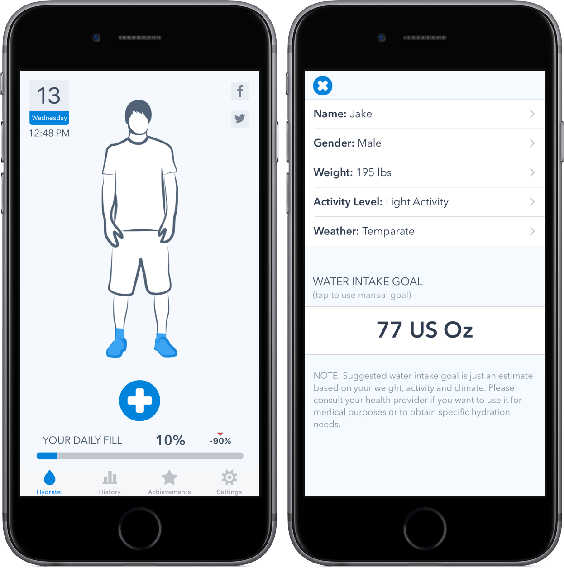 Most smartphone users have either experienced or heard of health tracking apps, since they’re usually a built-in feature. They measure and track the user’s daily physical routine and health requirements. Similarly, as suggested by the name, WaterMinder tracks your daily intake of water. Like other health tracking apps, the application initially and routinely requires info about the user’s intake of water. WaterMinder is available on iPhone, iPad, and Apple Watch but in the iPhone version of WaterMinder the user can customize the experience. Just like other health tracking apps, WaterMinder also requires a simple set-up during which the application requests to access the Health information stored in the device to calculate daily water intake requirement. After the set-up, the record of the water intake of the user will be stored in both, Health and WaterMinder.

Using the app is fairly simple. The user has to enter the amount of water consumed each time. The progress of the user is shown as the intake percentage increases by covering a blue graph. Moreover, WaterMinder also shows the history of water intake for the week, month and up to a year. This is to get an average but large scale idea of the user’s long-term consumption of water. The app does consist of more handy and favorable settings, allowing the user increased reliability from it. Reminders in the app, both default, and custom, are to assist the user to follow his personal routine timely. As for the cups, it is possible to input custom container capacities without having to measure the practically used cup or container with respect to the default cup sizes in the app each time water is consumed. These two features seem to be the best personally customization features in the app.

To make things interesting for users, there are achievements which are obtained when a specified routinely task, obviously regarding water consumption, is completed. It may be just for show, but it might prove to be motivational for some people who strive for good health. This feature is also included in the Apple Watch version of the app.

The Apple Watch version is a simpler and toned down version of the normal iOS device versions. It contains the basic synced details and shows the past week’s water intake. It retains the same achievements shown in the iPhone app version. Additionally, the intake details can be modified as well. Although it isn’t what one could expect it to be and isn’t entirely optimal in this version, it does ease tracking the routine.

All devices having WaterMinder logged in with one account will automatically sync the data, making it possible to carry any of the iOS devices while still keeping track of the user’s health. Considering how it’s an app entirely for one purpose, it might just be worth the $1.99 for it on the App Store.