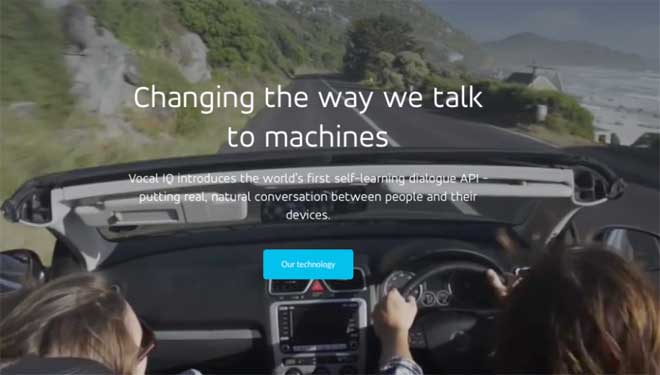 ‘Business Weekly’ was the first to report the speculations about this deal however later Apple itself confirmed the purchase of ‘VocalIQ’ to ‘The Financial Times’ with the usual boilerplate statement: “Apple buys smaller technology companies from time to time, and we generally do not discuss our purpose or plans.”

This purchase of ‘VocalIQ’ is of great interest for a couple of reasons as noted by the report. First of all, the team behind ‘VocalIQ’ believes that their voice assistant is much superior to that of Apple’s. ‘VocalIQ’ wrote in a blog post that Apple’s Siri launched to much hype then settled into only being used as a toy.

The UK-based start-up uses machine learning to build conversational virtual assistants, much like those we have seen in films like Her and Iron Man. But what spikes the interest even more is the fact that the firm also has experience in creating conversational virtual assistant for use in cars. ‘The Financial Times’ also reported that earlier ‘VocalIQ’ has played a quite active part in the productions of some in-car applications of its virtual assistant. ‘VocalIQ’ even partnered with some of the biggest names in the industry like ‘General Motors’ therefore Apple can make the most of it if they are able to integrate that team into their endeavors like ‘CarPlay’ and ‘Project Titan’.

This purchase will have a huge positive impact on Apple’s already quite popular iPhone-connected CarPlay feature in which users can use iPhone-based services like Messages and Maps with much ease while driving safely.

Another project on which the tech giant is currently working on is the “Apple Car”, which is expected to  be unveiled 4 years from now, that is in the year 2019. There has been a number of hires related to this project, which has been dubbed, “Project Titan” however this specific deal can greatly benefit the company in this regard as a more conversational Siri will surely make CarPlay look like a trial run.