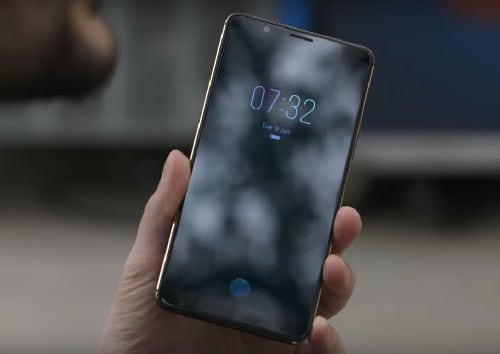 There has been a lot of speculation in the past about who will be the first to incorporate an in-display fingerprint sensor in a smartphone. The race was on between Apple and Samsung, but apparently, neither of them came out on top. Come to find out it is Vivo that bagged the claim.

The in-display fingerprint sensor was revealed at the CES 2018 in Las Vegas. This is going to be a part of Vivo’s next flagship called the Vivo X20 Plus UD. The UD stands for under display and the phone is based on the already existing model, the Vivo X20 Plus. This means it has a 6.43-inch Super AMOLED screen, a Qualcomm Snapdragon 660 processor, 4GB of RAM, a 3905mAh battery, and a dual-lens 12-megapixel and 5-megapixel camera on the back. In addition to that, the bezel-less screen makes it an attractive choice.

Vivo is working closely with Synaptics. Samsung was working with the company too on the optical sensor but gave up once they realized that it would not be complete in time for S8 release. Vivo says the sensor on the X20 Plus UD can be used for mobile payments and is essentially “invisible” tech. The icon stays hidden until it’s needed, and with no physical hardware required, you won’t know it’s there until that time.

The technology is now complete however and Vivo is the first to get its hands on it. Vivo’s current flagship smartphones have advanced fingerprint sensors, aside from other features. For instance, the Vivo X50 Pro comes with an in-display fingerprint sensor, along with an optical sensor, for added security. The fingerprint sensor works the same way as we are used to the sensors working. Albeit it is a bit slower than the ultra-fast sensors of today. It is not that slow that it would cause you problems but since it is a new technology and still in the development phase, it is understandable.

Not many people will probably be lining up to buy the new Vivo flagship but it will be a step towards the future. Now many other companies will be jumping on board with the technology and will be incorporating it into their own phones. We can surely expect Apple and Samsung and even LG to follow suit.

The phone is available to pre-order in China after the 24th of January but is not sold internationally as of yet. Maybe it will make its way across the international waters soon. If you want to get your hands on the phone, you either have to be living in China or sit back and wait.

You can check it out in the video here.