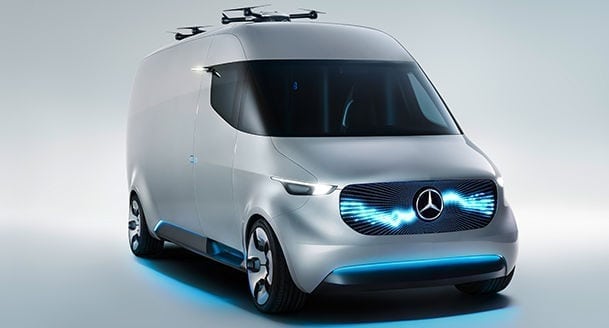 With the advances in technology, robotic arms have been taking human labor’s place for a long time now. Mercedes takes this several steps further with their newest vehicle. The Vision Van has made sure that last-mile logistics will be propelled into the future. A more efficient workforce, that can deliver packages in a shorter time.

Benz unveiled this future generation delivery van in Stuttgart back in September. It was on display at CES in Las Vegas recently. The Vision Van will be doing the work of a delivery van. This means its job is to collect packages at a depot after air, sea or road shipment and deliver them to the receiver’s doorstep. Mercedes claims that with Vision Vans, there will be no delays after the package has been shipped, due to traffic, bad roads, or any other factor. The Vision Van is a four-wheeled vehicle without any windows except the windscreen. It has no pedals or steering wheel for the driver, instead, a single joystick controls it.

New Twist on an Old Idea

The idea behind this innovation is the reduction of deliveries by hand and introducing air delivery by drone. This idea was first coined by Amazon, who imagined its delivery system to be handled by drones and automated warehouses. Mercedes-Benz has further formalized this idea by equipping its Vision Van with roof mounted drones. The drones are meant to be used for deliveries from the van using a robotic package sorting device to load the drones.

This system will reduce the time it takes for the delivery man to drive around local streets, locating addresses.  As well as delivering packages by hand. The Vision Van has the added feature of sorting the packages automatically. Unlike a regular truck, the Vision Van will be loaded at the depot center. This is done by replacing the empty cargo area of the van. A preloaded cargo area with packages is loaded into the van. The packages are sorted and placed in specific positions known to the robotic arm in the van before it departs the center. As the van gets closer to a package’s destination, the arm withdraws the package as well as a battery pack. It connects both to the drone which is deployed by the driver. The drone then delivers the package at the doorstep.

To build this newest edition of an automated van, Mercedes has shaken hands with Matternet, an autonomous drone company. Mercedes has confirmed that it doesn’t plan to make the Vision Van commercially in the near future. Even though they have the potential of becoming the next generation of a modern delivery system. The speed, convenience, and efficiency such a system will provide are by far superior to the worldwide delivery systems of today.

The only hindrance to such a system are the regulations which do not allow drone flights that are out of sight without a human pilot. Once this is worked out, the Vision Van can be made a reality.