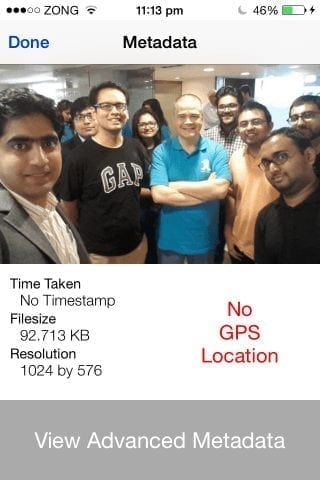 A Little Something About Metadata…

Most people are simply not aware of ‘metadata’. They either haven’t heard of the term, or if they do, they have no idea what it means since it sounds so complicated.

It is not complicated.

This data is regularly used by enthusiast photographers, computer forensics people, and sneaky people who want to know where you took that one special photo.

As far as memory serves, Apple has never built in the ability to view metadata in iPhone photos app ever. It’s just how Apple works: “eh, people don’t need it.” (implements 5 years later).

With iOS 8, Apple opened up the ‘Share’ menu to all developers. Now anyone can develop an extension (or ‘custom action’) that can work with the host app to enhance its features.

Photo Investigator may look like a terribly designed app – and it is that – but it comes with one useful feature. On iPhone and iPads running iOS 8, you can quickly view metadata of any image in the Photos.app by tapping on the Share button, and selecting ‘Metadata’.

To enable Photo Investigator, open the Share menu in the Photos app, tap on More, and turn on ‘Metadata’.

Photo Investigator is free. The host app allows you to view photo locations on a map, and also edit / remove metadata ($0.99 in-app purchase).