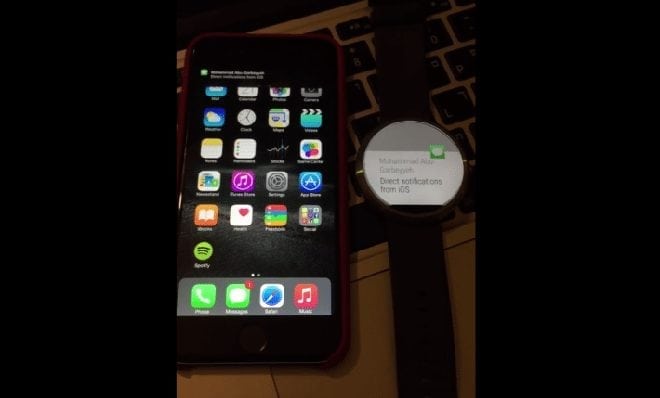 Are you one of those iPhone users who look towards the wide array of Android smart watches with envy, but can’t do anything about it? Most of these devices need an Android device, and for an iOS user, that can be a deal-breaker. It doesn’t necessarily have to be this way though, because there’s now a way for you to use Android wear with iOS!

Android Wear is the compact version of the Android operating system designed for smartwatches and other wearables. It has been almost an year since it was last released, and Google has been hinting on extending support for iOS devices. However, no such integration has been made as yet.

If you compare Apple’s iWatch with some of the Android wearables out there, the iWatch leaves much to be desired. There is a plethora of enviable Android Watches that even the most dedicated Apple fans would love to try out. Personally, I’ve been pining forever for a Moto 360 or an LG G Watch R – these devices define the Smartwatch.

iOS users need no longer envy their Android counterparts, for they can now use their iDevice with an Android Wear smartwatch!

This integration has been made possible by developer MohammadAG, who made use of a feature called Apple Notification Center Service (ANCS), which was first introduced in iOS 7. This feature is already being used by Pebble smartwatches that connect to iOS devices. Since it’s a built-in iOS feature, it requires no special permissions (jailbreak) or app to be installed on your iOS device.

To make the integration work, however, you need to install an application on the smartwatch. This app doesn’t need root access, but you will need an Android device to configure it for the first time.

The Android Wear experience is more than just notifications. However for now, you can only see notifications from your iOS on the smartwatch. At least it’s a start. The application has yet to be released, and the developer will hopefully be open-sourcing it and adding more control. Stay tuned, and we’ll keep you updated on this project.