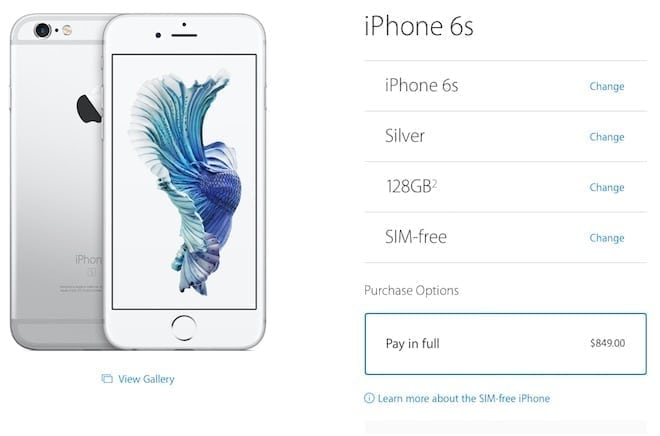 SIM-free iPhone 6S and 6S Plus

SIM-free iPhone 6S and 6S Plus are now obtainable in Apple’s online store.

Two weeks after the latest iPhones, iPhone 6S and 6S Plus were made available to the public, the Cupertino-based company has announced a new purchasing option for the latest devices to its online store. According to Apple, from now onwards consumers can get their hands on a new iPhone 6S or iPhone 6S Plus which will be SIM-free, unlocked and without a carrier.

The tech giant explained this alternate way of buying iPhone 6S on its online store. It is said that now the customers will be able to purchase a SIM-free iPhone which will neither require signing a contract commitment nor do the customers have to deal with all the fuss of carrier financing. It is important to mention that the iPhone 6S will not come with a nano-SIM which means that Apple has now given its customers a choice to choose their own carrier and get a SIM from their favourite  carrier only. However this of course, implies that the entire cost of the device must be upfront.

“The SIM-free iPhone comes without a wireless contract commitment or carrier financing. It doesn’t come with a nano-SIM card for iPhone 6s, iPhone 6s Plus, iPhone 6, iPhone 6 Plus, or iPhone 5s. And because it’s unlocked, it isn’t tied to one carrier, so you can get a nano-SIM from any supported carrier worldwide, such as AT&T, T-Mobile, Verizon, or Sprint in the United States.”