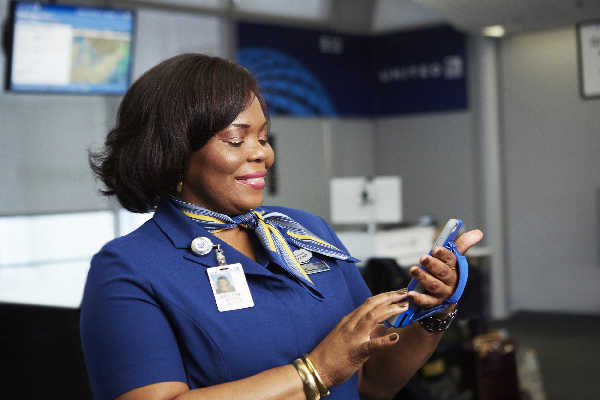 United Airlines and United Express operate an average of nearly 5,000 flights a day to 352 airports across six continents. In 2014, United and United Express operated nearly two million flights carrying 138 million customers. United is proud to have the world’s most comprehensive route network, including U.S. mainland hubs in Chicago, Denver, Houston, Los Angeles, New York/Newark, San Francisco and Washington, D.C. United operates more than 700 mainline aircraft, and this year, the airline anticipates taking delivery of 34 new Boeing aircraft, including the 787-9 and the 737-900ER.

In a recent press release, United announced that the airline will equip its customer service reps in U.S.-based hubs with Apple’s iPhone 6 Plus. This will better enable agents to meet their customers’ needs more quickly. Agents will also have access to additional operational information.

United will begin distributing the devices to more than 6,000 hub-based customer service representatives in 2016. The iPhones will enable agents to assist customers who have checked into their flights with several pre-departure actions, including printing boarding passes and baggage tags anywhere in the airport. Customer service representatives will also be able to assist customers with alternate flight options, helping employees at customer service locations provide additional attention to those with more complex needs.

Future enhancements will include tools to provide full check-in capabilities in airport lobbies and the ability to offer customers much of the same functionality as traditional airport kiosks.

“Our employees told us they needed better tools to serve our customers, especially during severe weather and busier travel times,” said Jon Roitman, United’s senior vice president of airport operations. “We have seen great success with the custom-made tools on the iPhone 6 Plus and believe expanding the use of a smart phone device with other applications is a great investment in our employees.”

The deployment of the iPhone 6 Plus to United’s hub customer service representatives follows the airline’s distribution of iPhones to flight attendants last June and iPads to pilots in August 2011.