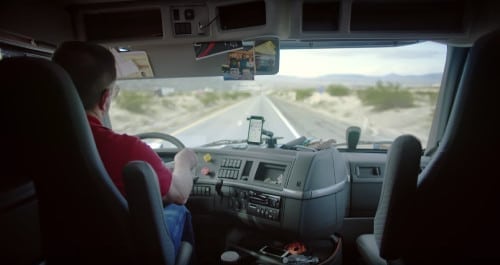 Uber has a vision for long-haul trucking. Uber Freight has been hauling loads on Arizona highways for several months now with self driving trucks.  For the time being, these trucks have a CDL licensed driver at the wheel, just in case.

Uber’s vision for the future of trucking is to eliminate a human operator in the cab for long hauls. It is relying heavily on autonomous systems for navigating the highways. A real truck driver is also needed for the many non-driving tasks a professional big rig driver needs to perform. Tasks like the pick and drop off of trailers, loading, fueling, inspections, etc. Short runs will require human drivers as well since these self-driving trucks are not allowed on local roads. Uber’s vision will include transfer hubs where the short-haul trucks meet the long haul autonomous trucks to switch trailers. The short-haul drivers will deliver the loads to the customer receiving dock.

Getting to this point was not without challenges for Uber. Uber’s self-driving truck has its roots in the 2016 acquisition of Otto, who was already working on autonomous trucking.  Otto was founded by an ex-Google engineer. There was a lawsuit regarding intellectual property where the plaintiff was Waymo, which is Alphabet’s autonomous car division and Google’s parent company sued Uber. Once the case was settled, Uber moved forward more publicly with its vision for long-haul trucking.

Waymo has its own plans for long-haul trucking as does Tesla with its recently announced all electric big rig. Mercedes, Volvo, and Freightliner are also working on their visions for trucking.

Long haul trucking is the best use case for autonomous technology. Trucks can stay on the road longer with no driver. No DOT limits on the time behind the wheel as is the case with human drivers. There is also a good case for safety. Many trucking accidents are the result of a tired driver. The ability of these trucks to stay within the speed limit for an extended period of time will make the highways safer while getting freight where it needs to go in less time.

Check out this video to learn more about Uber’s vision for long-haul trucking.