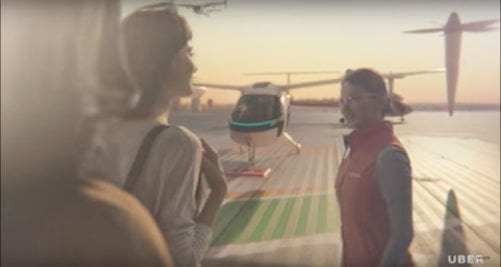 Uber introduced the concept of flying cars last year, then the hype died down but Andrew J Hawkins from The Verge broke the story that has brought back the project and shows what the company plans for the future. In a speech at the Web Summit in Lisbon, Jeff Holden, Uber’s head of product announced that Los Angeles will also be a part of the flying car’s project, adding to the previously announced cities of Dallas-Fort Worth and Dubai.

Jeff announced that the company has signed an agreement with NASA to create a brand new air traffic control system to manage these low flying crafts which could very well be autonomous in nature. Uber also released a video demonstrating what the final product would look like from the perspective of a working mom trying to get home to her family. You can see the video here.

Closer Than You Think

The closing tagline of the video is “Closer than you think”. How much closer are we talking about? The project is still faced with significant hurdles. The type of vehicle Uber is planning to launch, which has the ability to take off and land vertically is still not in existence.

Experts suggest that such cars might be impossible to make but that has not dampened the spirits of the companies pursuing such projects. Boeing and Airbus are among the top names with startups like Kitty Hawk as well. All of them are trying to manufacture their own brand of flying vehicles.

Uber has already partnered with a number of aircraft manufacturers, real estate firms and regulators to improve its chances of developing a fully functional flying car-hailing service. The project head says that the company is not done making friends More such partnerships are expected to be announced in the future.

Even though Uber still does not have a product to demonstrate, they have come much farther than people thought as explained by Jeff Holden,

“There’s been a great deal of progress that’s been hard to see from the outside, because a lot of this is just hard work at the drafting table,” he says. “We feel really good. It’s been a really interesting process getting our vehicle manufacturing partners aligned on performance specifications, so that they’re building vehicles that align with what we need to make Elevate successful. So lots of good progress there.”

Teaming up with NASA is perhaps the biggest confidence booster for Uber. NASA introduced the un-crewed traffic management (UTM) project in 2015. This will be a perfect opportunity to implement it further. As reported by Ben Popper two years ago,

“It’s an attempt to put an end to the Wild West atmosphere that has been the norm for un-crewed aerial systems (UAS) over the last five years, replacing it with a next-generation air traffic control system.”

According to Jeff Holden, the testing does not have to be delayed as far as 2020. The company aims to start testing the UTM system at the Dallas-Fort Worth Airport as soon as possible.

“NASA is very focused on getting UTM adoption and pressure-testing the framework and make sure it works correctly,” Holden said. “Uber is actually trying to put this new air traffic system into production.”

LA is one of the most congested cities and that is why the company decided to shift their services here as it would do the most good.

“It’s one of the most congested cities in the world today,” said Holden. “They essentially have no mass transit infrastructure. This type of approach allows us to very inexpensively deploy a mass transit method that actually doesn’t make traffic worse.”

One concern raised by the critics is that even if Uber does succeed in launching the flying cars successfully, it might come at a price that only the wealthiest of people would be able to afford it. But Uber has denied that.

“That’s not Uber’s MO,” Holden said. “If we’re doing this, you have to believe that we’re going to get the price very low.” He thinks it will be cheaper to travel this way than it will be to own a car.

“Obviously, I like flying things. But it’s difficult to imagine the flying car becoming a scalable solution.” Holden replied to his statement and said “We’ve studied this carefully and we believe it is scalable. We’ve done the hard work so we can build skyports, and can get the throughput operationally to move tens of thousands flights per day per city.”

The implications of this flying cars project are huge and will change the lives of many if it does come to fruition. The next few months are crucial and will tell us more. Uber believes that the path ahead is clear.