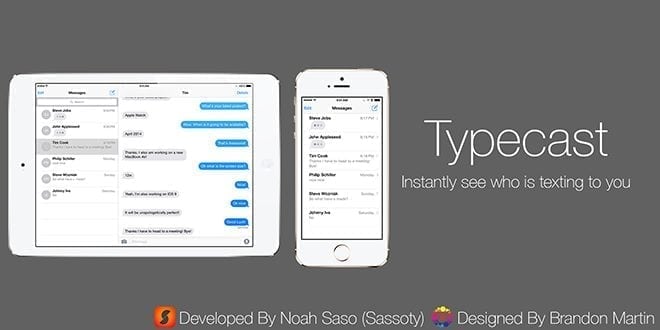 Have you ever felt the need to check up on who is active within Apple’s iMessage app? Unlike WhatsApp, iMessage doesn’t let you view when someone is typing while you’re on the main screen. An upcoming Cydia tweak, Typecast, will let you do just that! Now you can view who is actively typing right from your iMessage main screen!

iMessage, however, leaves much to be longed for. Apple has introduced some new Whatsapp-like features with the iOS 8 release, but still has a long way to go. One of annoyance of this messaging app is, you have to go into individual message threads to see if the other person is actively typing something or is about to send you something. You cannot view this directly as in Whatsapp.

TypeCast – developed Noah Saso and designed by Brandon Martin – is a work-in-progress jailbreak tweak that, once installed, will bring the typing indicators from within each message thread, and out into the main screen. So, you can see at a glance which message thread recipients are currently typing a new message.

It is a wonder why Apple did not include this into iMessage from day one. I cannot think of any reason why Apple thought this could be a detriment to user experience. Maybe they were just being lazy, or maybe they just left it out in order to implement it in iOS 9. We won’t know for sure.

Anyhow, TypeCast is expected to be launched shortly. We will cover it separately when it does actually launch. Until you, prep your device by jailbreaking iOS 8.1.2 using TaiG (Windows) or PP (Mac OS X). If you have upgraded to iOS 8.1.3, then quickly follow our guide on how to downgrade iOS 8.1.3 to iOS 8.1.2 before Apple stops signing iOS 8.1.2.

imessagejailbreak tweaks
Previous ArticleHow Many iPhones, iPads and Macs Apple Sells In Real-Time (Q1 2015)Next ArticleDowngrade iTunes 12.1 To 12.0.1 To Use TaiG / PP Jailbreak For iOS 8