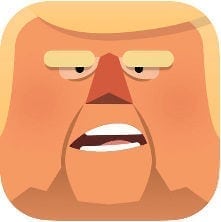 As some of us had already predicted, the U.S presidential race is more like a literal “Game of Thrones” that has turned into a reality show. In this game, the main characters are Donald Trump and Hilary Clinton. And would you want to take a guess about its name? “Jrump”, yes.

Some of you might not be aware that Trump wants to “make the galaxy great again.” Now let’s take a look at what you need to do in the game. 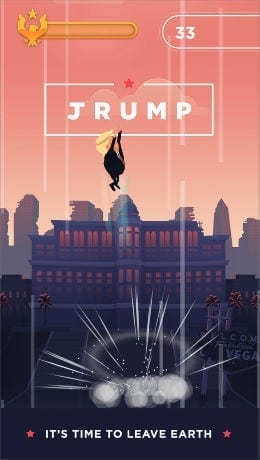 In this challenging game, you need to build walls, which make “Trump” fly higher and higher in the sky. When they attempt to run into outer space is being made he is attacked by his rivals Hilary Clinton, President of the United States Barack Obama, Bernie Sanders, and Kim Jong Un.

Trump is named “Jrump” and he is, of course. The main character and all the adversaries are not named clearly. But we all know who everyone is.

The game, however, does not include the current phase in which the presidential race is now in. It is based on a scenario where Trump a.k.a Jrump has won the election. The game starts in yours and our favorite location: Las Vegas. Your enemies are going to be dressed in jetpacks. They are going to be obstacles that are going to send you back to planet earth. The game has some harsh words for you if you lose like “Weak!” and “Loser!” It is an addictive game. If you remember Flappy bird, you can relate. However, it’s a fact that THIS game is way more creative. 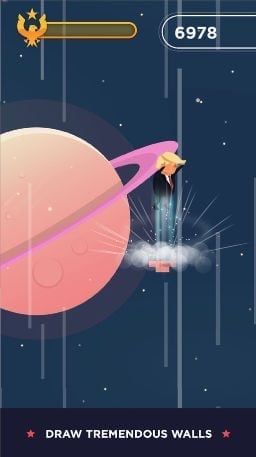 Jrump is the creation of New-Zealand based developers, Oddboy Apparcanum Limited. You can download it on both iOS and Android. Developer studios Oddboy and AppAcranum have the credit for this game. They say on the website not to take it too seriously. Why, because it’s the era of social media, and people get offended easily.

“The idea is simple: The year is 2017. Following Donald Jrump’s successful bid at the 2016 US election, international borders have closed up. Global warming research has halted. Brick sales have increased at a staggering rate. With the world now in utter chaos his tiny hands grow increasingly sweaty. It’s time for Donald to leave to make the Galaxy great again. How? By jumping on his favorite things in the world… Walls!”

Believe it or not, it even comes with a trailer which is extremely funny. 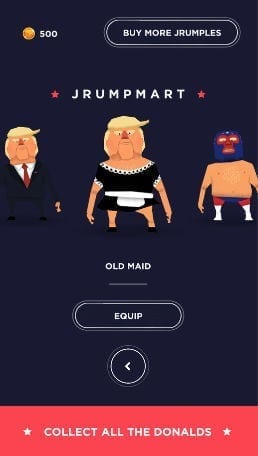 If you are thinking about voting for Hilary and feel like this game is not for you then no worries. The game is fun and will make you feel entertained no matter what side, you are on.  If you want to play a game with Hilary you can take a look at “Dancing Hilary” on Miniclip.com! Most of us have picked sides already, especially after The Presidential Debate.

So are you set to have fun and send Trump into outer space? Avail at the chance when you have it to play Jrump!