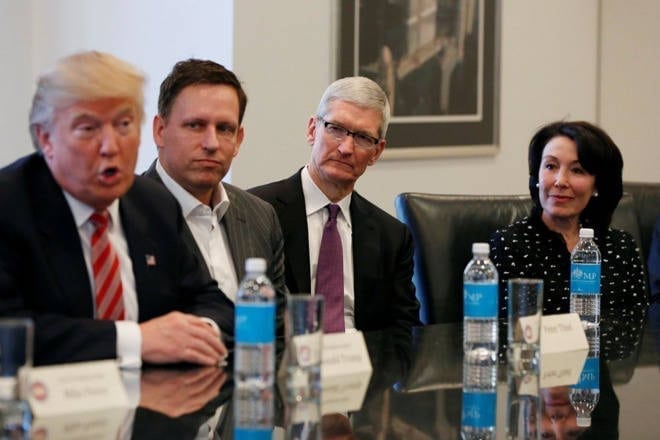 Newly elected President, Donald Trump organized a tech summit at Trump Towers in New York City. The purpose was to collaborate with various tech magnates and discuss various social and economical issues. And how these tech companies can be a part of the solution. Tim Cook, Elon Musk, Alphabet’s Larry Page, Eric Schmidt and Facebook COO Sheryl Sandberg were present there. Additionally, Amazon’s CEO Jeff Bezos, Microsoft CEO Satya Nadella, and IBM CEO Ginni Rometty were also among the attendees. The summit was also attended by Donald Trump’s second in command Mike Pence and three of Trump’s children —Eric, Ivanka, and Donald Jr.

“This is a truly amazing group of people. Anything we can do to help this go along, and we’re going to be there for you… you’ll call my people, you’ll call me – it doesn’t make any difference. We have no formal chain of command here. We’re going to do fair trade deals, we’re going to make it a lot easier for you to trade.”

Trump and Cook had a falling out during the campaign. However, they are slowly moving towards mutual agreements. As reported earlier Foxconn had previously devised a plan to set up some plants on US soil. Note that Foxconn manufacturers the majority of electrical components used by Apple.

According to the Wall Street Journal…

…executives introduced themselves one by one.

“Tim Cook, very good to be here,” said the Apple CEO. “And I look very forward to talking to the President-elect about the things that we can do to help you achieve some things you want.”

This is just the start of the initiative taken by Donald Trump.