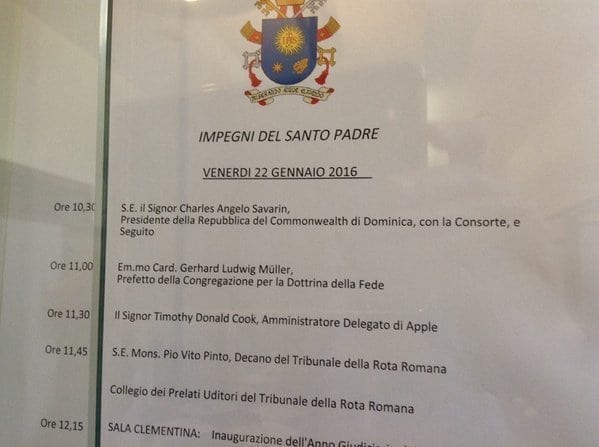 Tim Cook, the CEO of Apple, today had a meeting with Pope Francis. No specific details about what both discussed were disclosed about the meeting which took place at 11:30. The Pope did though talk about technology as well as social media. He even ventured as far as to say that the modern modes of communication are a “gift of God”. The message was a part of the World Day of Communications of the Roman Catholic Church.

“Emails, text messages, social networks and chats can also be fully human forms of communication,” he said. “It is not technology which determines whether or not communication is authentic, but rather the human heart and our capacity to use wisely the means at our disposal.”

Apparently the Pope himself is a “disaster” when it comes to anything related to technology however he was still pretty good at wading the technological waters, so to speak. This is Pope Francis’ second meeting in two weeks with a big technology expert. His first meeting was with the former Google CEO Eric Schmidt last week.  Cook met with the Pope in Rome as noted in the Pontiff’s daily schedule which was then posted to Twitter. Tim Cooke’s name is listed as “Signor Timothy Donald Cook, Amministratore Delegato di Apple” in the notification.

It is also interesting to note that even though Tim Cooke is a very openly gay individual who has taken pride in his identity, Pope Francis still made a point of meeting him. It seems that Pope Francis is determined to bring the papacy into the twenty-second century while very confidently straddling the issues of homosexuality as well as the catholic Church’s tense relationship with technology. Another important observation made by Tom Cheshire from Sky News is that both Tim Cook and Pope Frances are “very keen environmentalists” so perhaps they met up to discuss the issues related to the environment. We also sincerely hope that Pope Francis will be able to do what time has not; get both Apple and Google to come to terms with controlling their competing mobile phone platforms.