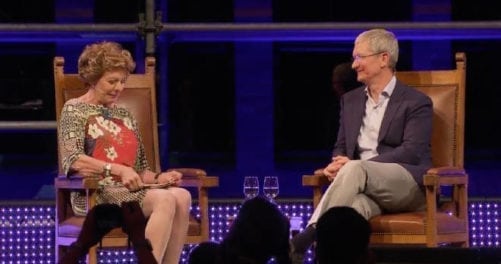 Tim Cook, who was featured at Startup Fest Europe this morning and talked about Apple’s contribution towards helping startups and advancing an entrepreneurship culture, in an interview with Neelie Kroes. Cook discussed many topics such as the role of entrepreneurs and the App Store, economic optimism, technology in education and the Apple watch.

Tim Cook said that Apple provides entrepreneurs with the ability to market their apps globally almost instantly using the App store. Apple gives them marketing and technical help to ease them into the entire process, all the while leaving their brains to focus on the product itself. Apple is soon opening an app development center in Naples to pioneer the app economy in some yet untouched areas.

Cook stressed on the impact of the European tech landscape on startups as well; he praised Europe’s laws that aid institutions to steady their businesses due to a strong and effective legal system with regards to technology. Cook went on to say that investing in people is the foremost priority, quoting the saying:

Regarding education, Apple CEO, Tim Cook stressed that coding should be made a mandatory part of a child’s learning, at least initially. According to Cook, this will breed more diversity in the tech industry and draw more people to the field. Cook said that coding is slowly seeping into all industries, that it is not so separate as it once was. He said that tech is now crossing paths with interesting fields such as medical or environmental engineering. In Cook’s own words “we are doing our kids a disservice if we are not introducing them”.

When speaking about the economy, Tim said that there is a liveliness in the European market that he hasn’t felt in a while and this has him encouraged for Apple’s products and the European economy overall. When asked about Apple being a “closed platform, Cook replied by saying that an App Store with 2 million apps is not that closed”.

For the Apple Watch, Cook said that one day we will look back and wonder how people lived without the Watch. Cook explored the possibility of an Apple Watch that would closely monitor what is going on inside your body and provide information to help extend your life. He admitted that this was not possible with the present technology but hoped that the future would make this dream a reality.