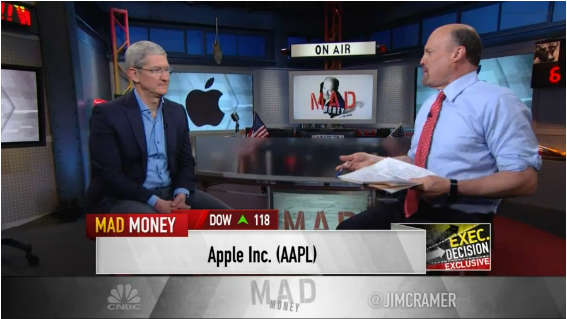 Apple has had a few setbacks lately, including, lower iPhone sales, lower revenue than previous quarters, China forcing them to close iBooks and iTunes Movie downloads. All of this effects APPL stock and drives reactions that have led some to sell off their entire position in the company. I think we’re jumping the gun by thinking the Apple iPhone has run it’s course or that the company is in decline. I suppose a level of panic is a normal reaction for investors but if you step back and realize that the iPhone is not just a piece of hardware. It’s much more than that. It is a link into an entire echo system of services that many of us can’t or won’t do without.  Services are Apple’s second largest revenue stream.  Apple recognizes this and is looking to expand services. The rumors of Apple’s desire to produce original TV content is an indication Apple is serious about its alternative TV subscription service for example.

Apple’s CEO Tim Cook was interviewed by CNBC’s Jim Cramer recently and discussed these and other topics.  One of the first concerns raised was Wall Street’s reaction to an “OK” quarter.  Revenue of over 50 billion with a profit of over 10 billion is an awesome year for any company but apparently the street has come to expect a lot more from Apple.

Apple is secretive when it comes to what’s in its pipeline, as it should be. We know that Apple acquires a new company about every three weeks, mostly for their technology and talent. New patents are filed regularly, new talent is hired and these seem to be good indicators that new products and services are being worked on. A knee jerk reaction over a weaker quarter (for Apple) but what would be considered a phenomenal quarter for other companies seems short sighted to me.

Mr. Cramer made two statements that resonated with me; the point that “Apple’s power goes beyond its products” and that “APPL is something you own, not trade”. I couldn’t agree with him more.

Check out this interview in two parts.