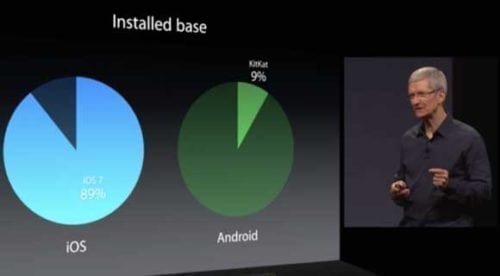 There are very few people who start their smartphone journey with an iPhone. Most of Apple’s customers are those who buy a string of Android smartphones before settling on an Apple product. Apple has been looking at the trend of this transition from Android to Apple for quite some time. Tim Cook, the Apple CEO, happily informed the people attending the Q3 201 conference that the number of people switching to an iPhone from Android phone was the highest in this quarter. So excited was Cook with this trend that he mentioned this fact on 4 different occasions during his one-hour speech.

Cook said that Q3 201 registered the highest number of Android users switching to Apple products in a single quarter. This is taking place everywhere across the world and not just in developed markets as people wait for some time to save money and buy an Apple product instead of trying yet another Android smartphone. This is an indication of the confidence and trust that Apple products enjoy worldwide. It also reflects the high satisfaction rate that customers are getting g from their Apple products. Cook was happy to say that a huge gap has emerged among the customers as far as loyalty rate of iPhone vs. the competition is concerned.

Cook added that Apple is winning everywhere. In some geographical regions, this win is reflected in the number of people buying an Apple product as their first smartphone whereas, in other regions, it is reflected in people switching to Apple from Android. In yet other regions, the way Apple is winning is by getting people to upgrade their existing iPhones.

When the time comes to renew one’s phone, most people search for the next cheapest alternative though the number of people thinking in terms of iPhone is growing exponentially. This is because people find that they did not have a great experience using their previous phone and they should buy something that belongs to higher end.

This is one big reason why Apple doesn’t compete with other companies in terms of price but the user experience that it can give to its customers. Apple does not believe in playing a short game to win over its competition. Apple started to produce big screen iPhones starting with iPhone 6 and iPhone 6 Plus only because it felt that there is a large number of people who enjoy large screens.