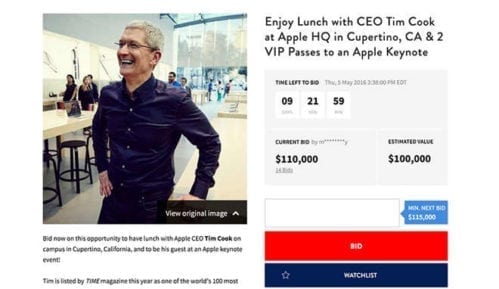 Once Again Tim Cook sets up an auction for charity, giving people a chance to dine with him.  The current being the fourth following the 3 consecutive years of the annually held event. The format is the same as before, the highest bidder will be given this opportunity to dine with Apple CEO, Tim Cook at Apple’s headquarters in Cupertino. The bids have just recently started and have already gone over $130,000.

Two people would be able to join Cook at the almost-one-hour-long lunch meeting. Keeping a surprise like last year, tickets to an unspecified Apple event will also be given to the highest bidders. The bidding would cease by May 5th. As for the lunch, the date and time would be negotiated over and set personally after the bidding ends. However, only the lunch cost is included in the price of the auction. The rest of the expenses for the trip to Cupertino are all to be taken care by the winners themselves. But who knows? It might be worth it. In fact, the WWDC is just around the corner perhaps that might be the keynote for the VIP passes. Though, it may be best to not expect that as a major possibility. It is still in the shadows.

All the donations collected by this auction will be donated to the Robert F. Kennedy Center for Justice and Human Rights, a charity which aims to achieve a “just and peaceful world by partnering with human rights leaders, teaching social justice and advancing corporate responsibility.”   Last year’s event had included this hour-long lunch with the VIP passes to the Keynote, something not included in the two before that. Albeit, the 2013-14 auctions raised a lot more than the 2015 event, raising about $610,000 and $330,001 respectively.

The bids will surely continue to rise but how much, it can’t be said. However, judging from the past years’ reports, the bids might rise continuously until the very last minute.