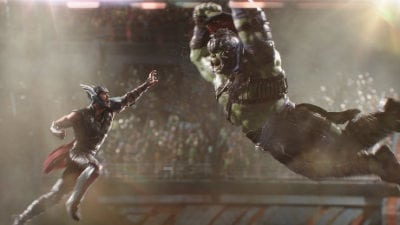 Thor: Ragnarok hit the theaters earlier this year and similar to Marvel’s other movies, business is booming. However, Thor: Ragnarok has gained fame for another reason as well. It has some of the best visual effects in all movies to date. The film makes use of new technology developed by Satellite Lab.

This new technology combines moving light with high-speed imaging. Jake Morrison, the visual effects supervisor for the film describes the technology that enabled this slow-motion photography as “Like a new age version of bullet time.” He was referring to the multi-camera array that was used to film the famous scenes in The Matrix.

Morrison goes on to say, “But, whereas bullet time enables you to freeze a moment in time and then move the camera around at impossible speeds, depicting it all realistically, this is literally like a 180 degree version of that.”

This technology is patented by Satellite Lab and is known as DynamicLight. Carlo Van de Roer is a visual effects artist and the co-founder of Satellite Lab.

Satellite Lab was founded by Van de Roer, Stuart Rutherford, and Matias Corea. The three of them developed a way to move a light source at more than 10,000 feet per second, which is 8 times the speed of sound.

By using a high-speed cinema camera to arrest a moment of time with light sources moving at over 10,000 feet per second. This technology creates the ability to control the movement of light sources and the movement of the scene as independent variables. It is recommended to be used with high-speed cameras such as the Vision Research Phantom. It can also be used with lower frame rate cameras, such as Arri Alexa and Red Weapon, or even a DSLR. This will provide dynamic moving light at various frame rates.

This is what we know about the patented technology so far. We can expect this technology to be used in future films since visual effects supervisors are willing to experiment more and more.

EntertainmentFilmThor: RagnarokvideoVisual Effects
Previous ArticleWho Is Satoshi Nakamoto, The Founder Of BitcoinNext ArticleDrinKup A Smart Bottle That Stands On Its Own