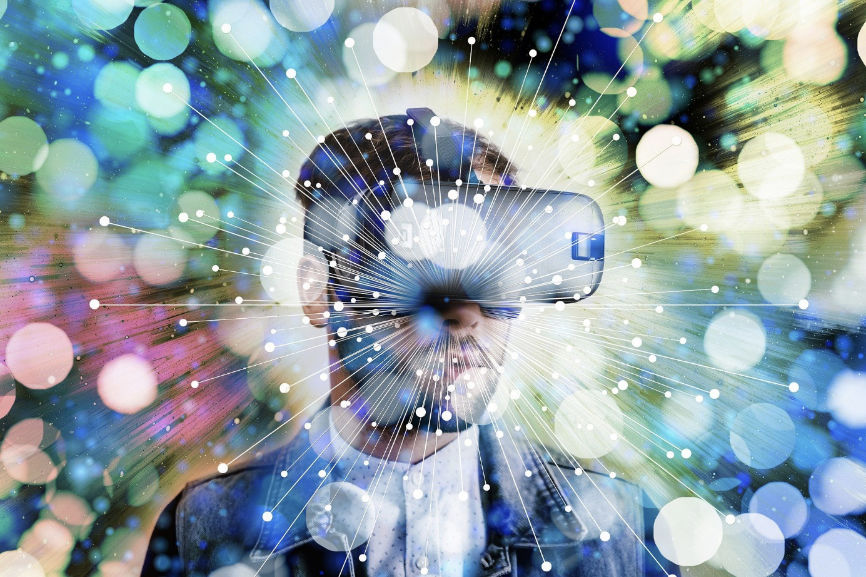 A parallel universe that would merge virtual and real worlds seems as far-off as flying cars. But what if this shared virtual environment was already within our reach? Big-tech firms are already working on the future of the internet. So is the gaming industry. And that future goes by the name of the Metaverse.

The Metaverse: welcome to the future

Metaverse, the word itself seems straight out of a science-fiction book. Unsurprisingly, it was indeed coined by futurist novelist Neal Stephenson. In his 1992 classic, Snow Crash, humans interact as avatars in a three-dimensional shared space. Ernest Cline later expanded upon the idea in his world-famous book Ready Player One, as he penned the concept of the Oasis.

So far, this alternate digital universe was confined to the realm of fiction. But the Metaverse has sparked unprecedented interest lately. If the endgame is to allow people to enter this mirror world physically, by mixing augmented reality and the internet, we’re not there yet. However, virtual realities where people can play, gather and even trade are already widespread. And they’re just the beginning.

Blockchain: a cornerstone of the Metaverse

Blockchain technology has been at the forefront of the metaversal experience. But what is blockchain? Simply put, this decentralized database can be compared to a digital ledger. Each block forms part of a unique and unalterable chain, which guarantees safe transactions. Blockchain underpins the concept of cryptocurrency. But it can also create and store unique digital assets called NFTs, or non-fungible tokens.

Blockchain-based platforms are actively pioneering the way to the Metaverse. Using cryptocurrency and NFTs, several platforms already allow their users to buy and trade virtual assets in their all-digital worlds. Some of the big names include Republic Realm, which invests in NFT real estate.

But the closest thing to a shared virtual universe is Decentraland. Users can explore this parallel world or attend special events. They’re also free to trade resources, from NFT artworks to land. And some of them are making quite a profit, as one parcel has recently been auctioned at $900 000.

A new sense of community in a virtual space

Crypto traders might use the Metaverse to make money, but its potential reaches far and beyond the crypto world. That’s why big-tech companies are closely monitoring the development of this cyberspace. Facebook has recently announced it was working on a Metaverse project. Ultimately, this virtual world could be a place for users to hang out or even organize business meetings. In a time of lockdowns and remote work, the Metaverse could be more powerful than ever to fuel social interactions.

To some extent, it’s already begun changing our everyday lives. And it shows in the gaming industry. Nintendo’s hit Animal Crossing: New Horizons lay the groundwork. During the pandemic, many players relocated their wedding or their family reunions in their own little virtual world.

Is the Metaverse the next frontier for gamers?

Thanks to augmented reality, gaming could be more immersive than ever. And some popular games have already shown metaverse tendencies. Epic Games founder Tim Sweeney confirmed it, as he claimed the Metaverse would be the next big thing. His company’s most popular franchise, Fortnite, is pushing the boundaries as it showcases virtual concerts, with real-life artists performing as avatars. So, what if the Metaverse changes the way we enjoy games entirely?

For now, mobile gaming is the dominant force. Casual games attract new users every day, just like mobile casinos. Mobile gambling is gaining more ground, thanks to its convenience and accessibility. To top it off, mobile-only promotions allow gamblers to enjoy a game of poker or fun machine slots for no cost at all. And the steady improvement of mobile technology guarantees enhanced graphics, as well as innovative game mechanics.

But if the Metaverse is the next logical step after the mobile internet, as per the predictions of Mark Zuckerberg, could mobile devices be powerful enough to sustain such an interconnected universe? Whatever the future holds, there’s no doubt the mobile gaming industry will reinvent itself once again.

As futurist as it sounds, a virtual environment where we move as avatars isn’t a mere fantasy anymore. The Metaverse is already pervading the lives of gamers, crypto traders, and social media users. And the revolution has only just begun.

How Artificial Intelligence is Revolutionizing the Gaming Industry