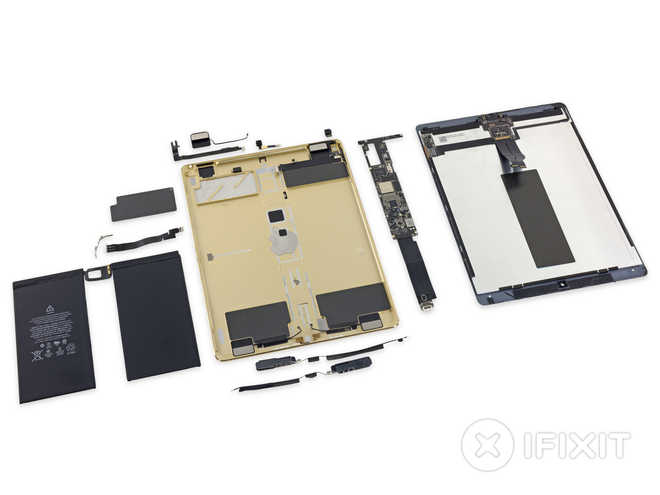 The guys at IFIXIT.org didn’t waste anytime jumping into an iPad Pro teardown and disassembling a brand new iPad Pro. Apparently the salvaged components are valuable enough to cover their cost of taking it apart.

They dug right in and were pleasantly surprised by something they were not expecting. In previous models, the battery was not soldered to the logic board nor was it slathered in glue making it very difficult to remove. The pleasant surprise was that the iPad Pro uses pull out adhesive tabs under the battery allowing for easy removal minus the sticky residue.

IFIXIT awarded the iPad Pro with a repairability score of 3 out of 10.  On the positive side was the ease of the battery removal. The front panel was not too difficult to remove but the materials in the front panel are fused together, making it an expensive repair. They went on to add that the Smart Connector port is not removable. Also the Lightning cable is soldered to the logic board.

IFIXIT gives you a tour of the logic board and the chip set used in the new iPad Pro in the video teardown.

In watching this iPad Pro teardown I learned something that I was not aware of previously in regards to audio on this device. Apparently, the higher frequencies move to the top most speakers automatically when you change the devices orientation, providing realistic sound reproduction.

IFIXIT calls the iPad Pro the first recyclable iPad.  It is interesting to see the guys at IFIXIT do their thing so we are sharing IFIXIT’s video of this particular teardown for your information and enjoyment.