The automotive industry has been moving full speed ahead with the development of autonomous vehicles.  A major goal has been to make auto-piloting as safe as if you were driving the vehicle yourself. The industry will surely take a pause in light of a serious accident that occurred. The New York Times reported the first autopilot fatality which occurred on Thursday when a Tesla Model S crashed into a semi-tractor trailer while the semi was making a left turn.  The Model S failed to yield to the eighteen wheeler resulting in the fatal crash. 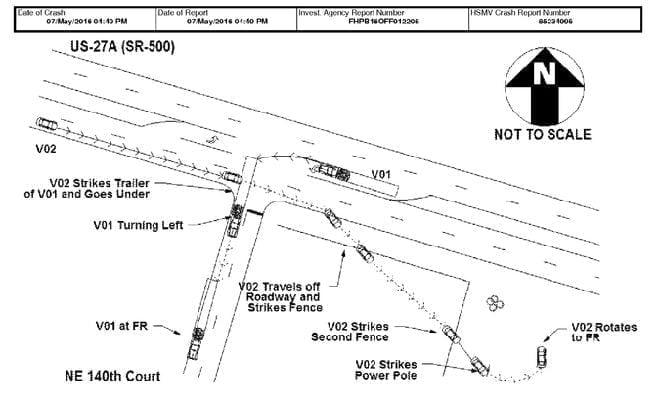 Image from the police report is from the Florida Highway Patrol

The view that self-driving cars can get its occupants safely from point A to point B has now come into question even though these vehicles are equipped with computers, sophisticated software, sensors, cameras, and radar.  The Tesla Model S simply failed to apply the breaks as stated in the preliminary report.  Both the car and the driver failed to see the white tracker trailer against a bright daytime sky.

The Florida Highway Patrol identified the driver of the Tesla Model S as Mr. Joshua Brown, of Canton, Ohio.  In a statement from Tesla they described him as a man “who spent his life focused on innovation and the promise of technology and who believed strongly in Tesla’s mission.”

Mr. Brown was a Navy veteran who owned a technology consulting firm. He was a major advocate of Tesla’s technology and posted a video of him demonstrating the same in stop-and-go traffic.  https://www.youtube.com/watch?v=5TjbqVartjM

The federal traffic safety agency will soon be releasing a new set of guidelines as well as regulations that will govern the testing of self-driving cars on public roads.  The New York Times reports that “at a recent technology conference in Novi, Mich., the agency’s leader, Mark Rosekind, said self-driving cars should at least be twice as safe as human drivers to result in a significant reduction in roadway deaths. “We need to start with two times better,’’ Mr. Rosekind said. “We need to set a higher bar if we expect safety to actually be a benefit here.”

CupertinoTimes extends our sincere condolence to Mr. Brown’s family for their loss. Our thoughts and prayers are with them.