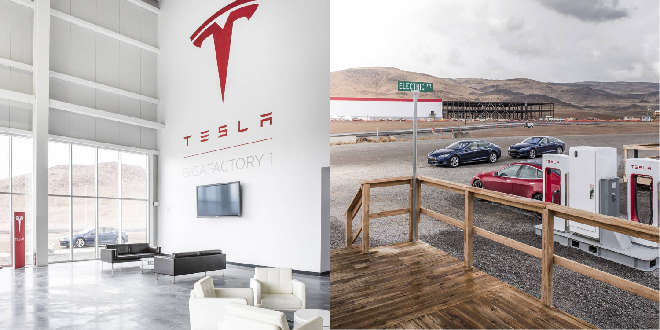 Tesla is taking a page from Willy Wonka’s Book in its new promotion—12 Golden Tickets (pretty subtle don’t you think?) are being given away to people having Model 3 reservations. The California-based automotive and energy storage company has sent twelve “Golden Tickets” to holders of Model 3 reservations inviting them to attend the Tesla Gigafactory grand opening in Reno, Nevada on July 29th. The promotion includes round-trip economy class airfare, transportation, and accommodation in Reno.

One of the lucky Model 3 reservation holders shared the received email from goldenticket@tesla.com, which reads:

Congratulations! Through random selection, Tesla has chosen twelve Golden Ticket winners from all those that placed Model 3 Reservations on the opening date to receive an all-expenses paid trip to our Gigafactory Grand Opening event on July 29th, 2016 in Reno, Nevada. We are excited to share that your name was chosen in this drawing and that we’d like to invite you and a guest to join us at the event.

Round trip economy class airfare, transportation, and accommodations will be provided. Tickets are non-transferrable. For additional details and to redeem your package, please contact goldenticket@tesla.com.

We look forward to seeing you and your guest at the event!

On inquiring a Tesla spokesperson confirmed the legitimacy of the shared email.

Tesla’s massive, 130-acre battery-making Gigafactory isn’t due to start production on lithium ion cells until 2017, but a grand opening is due to be held on July 29, a Fortune report states. The date was revealed in an email sent to customers, who won invitations to the customer-focused event by referring customers via Tesla’s referral program.

Furthermore, Tesla was taken aback by the interest in its Model 3. The car, which comes with a starting price of $35,000, is far more inexpensive than the luxury Model S and Model X models it currently sells, making it immediately popular among those who want to break away from conventional gas vehicles. Since then, some analysts have wondered how the auto-giants will satisfy heavy demand for its vehicles. However, Tesla CEO Elon Musk has said that his company will have no issue fulfilling Model 3 demand.

Analysts believe that there is no doubt that by the time lithium-ion battery factory is fully up and running in 2020, the factory will be producing, Tesla materials state, more lithium ion batteries yearly than the rest of the world produced in 2013 combined. This will reduce the cost of production by a projected 30 percent and, in theory at least, in turn, reduce the consumer cost of Tesla cars.