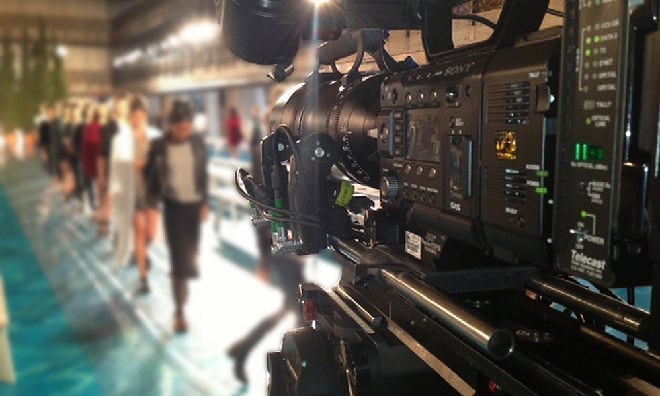 One thing you learn on a trip to NAB is that it’s easy to mingle with the mob at the National Association of Broadcasters show.  It’s quite another thing to figure out what is really going on in the media and entertainment industry.

Media & Entertainment Technology is being felt in every segment of the industry. To clarify what that means we’ll take a look at where start-ups and venture capitalists are focusing their energy and money.

One may not make the connection between NAB and NASA, but NASA set the stage by showing that breathtaking 4K HDR media can really be streamed to whatever device you’re viewing – anytime and anywhere you want. 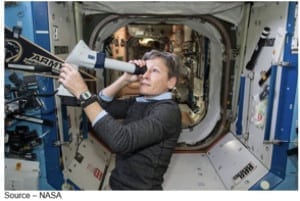 “Long Distance Quality – NASA’s Dr. Peggy Whitson set high video standards when she opened this year’s NAB event by streaming her 4K content to the Las Vegas Convention Center and the rest of the world over the Internet.  The video quality was excellent, especially considering the distance it traveled.”

Today 4K content is the starting point for filmmakers, production hardware, software, facilities, processing, storage, distribution, and consumption. Increasingly, filmmakers and content delivery folks are adding HDR to the mix because it delivers many more colors over a much wider dynamic range.

Blackmagic, Canon and Sony booths, as well as others, were packed and for good reason.

A lot of shooters were impressed with Canon’s new 5D Mark IV with a maximum dynamic range of 12 stops at 400 ISO. 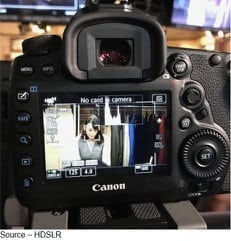 The Aussie company, Blackmagic seemed to have come from nowhere in the early 2000s. They always seem to have exactly what shooters have been waiting for. Blackmagic did not disappoint with its new URSA Mini Pro. The company set the bar pretty high awhile back when they introduced the low-cost, high-performance Micro Cinema Camera. This camera became the go-to solution for filmmakers. They attached it to drones for great aerial footage.

What really got a lot of Indie filmmakers’ excited was the revamp of DaVinci Resolve. 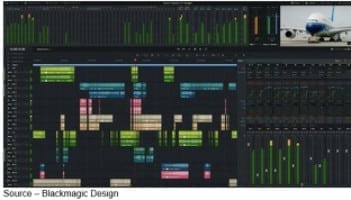 “Mindboggling – Blackmagic Design didn’t just add enhancements to DaVinci Resolve 14 this year, they made it richer and more powerful in almost every area.  Filmmakers and production folks got a detailed explanation at this year’s SuperMeet and spent a lot of time in the booth, learning more about the product’s new audio features.”

Resolve 14 provides post editors with enough tools that can do some fantastic things to make ultra-compelling video content.  As for audio, it works with 192kHz 96-bit audio and up to 1,000 tracks with real time EQ (equalization).  It also has dynamics processing and plug-ins on every track.

Filmmakers realize the importance of being able to record and play back numerous audio channels while mixing. Time is money when trying to meet impossible deadlines. Considering it provides an editing, color correction and audio solution all in one package and on a very tight budget should make Resolve 14 a big hit. 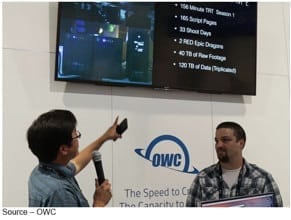 “Content Grows – Andrew Lee (L) and David Ward, of Ralph Smyth Entertainment, explain how the volume of content grew in the firm’s production of their recent sci-fi comedy series.  The two explained how they saved and preserved all of the content in the OWC booth at NAB.”

Our friend and fellow blogger Andy Marken met up with Andrew Lee and David Ward of Ralph Smyth Entertainment at the OWC booth to discuss their experiences in producing documentaries, web series and feature films.

“The two did an almost zero budget film in 2013 called Intramural that went on to win the NY Times Critic’s pick at Tribeca.  It was even picked up by MGM/Orion with a new title, Balls Out.  That was right at the time floods in Thailand meant HDs were scarce, expensive and subject to a lot of failures.   Fortunately, their content lifeline was a bunch of OWC Mercury Elite Pros.

At NAB, we discussed the company’s sci-fi comedy series, Crunch Time.  The premier season was shot in 33 days with only a “slightly better” budget and was so good, they’re already working on season two. The series is being shot using two RED Dragons and they’re producing about 1.5TB of RAW footage daily which is moved to hard drives on the set and copied in triplicate…just in case.

Like most Indie filmmakers, they also do documentaries that interest them. For their latest, Dealt, the crew followed Richard Turner, the world’s greatest card magician (who just happens to be totally blind) for over three years in five countries and over 12 cities. Sounds like a helluva’ story.

Our next article from NAB will be discussing VR media, production and the tools used in this newer form of file making.

CamerasEntertainmentMediaNAB
Previous ArticleIoT and Wearables – Match Made In HeavenNext ArticleApple Store Says, We’ll Be Right Back