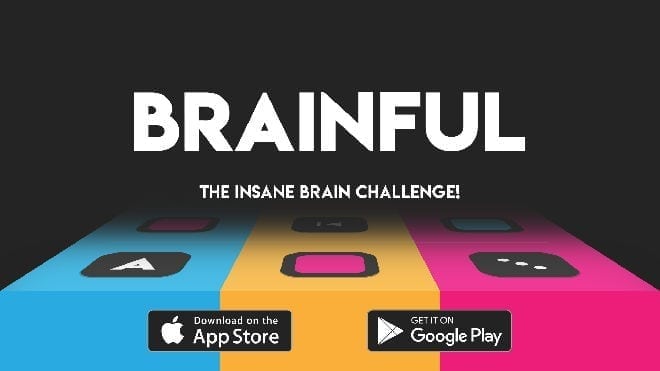 The creators of Color Magnet, TheOnePixel have done it again. By the way, since I installed Color Magnet, a day has not gone by that I have not played this game. But I digress. I am here to talk about another game TheOnePixel has introduced. A creative brain teaser is known as Brainful.  Launched in the App Store on July 20th Brainful will challenge you, stimulate your brain and test your reflexes, memory, and power of association.

A simple, clean design, that provides two game modes; Stepper and Endless. Stepper is basically an introduction to the game and has 18 levels. In Endless mode, the goal is to beat your own high score.  Either mode will give you brain a good workout.

I have been humbled by this game which is why I keep going back to it.  It’s fun and infuriating at the same time. A nerve shredding experience providing a challenge that is just waiting to be conquered. Brainful is addictive in a good way.

There are 7 colorful themes bundled in Brainful.  The game has relaxing music, soothing sounds and plenty of achievements to unlock.

Brainful is a fast paced game.  Cascading rows of symbols are presented and you need to decide which of three choices is the correct one.  Successful gameplay requires that the player remembers the previously selected symbol and tries to score as much as possible.  It is important to stay focused, follow the logic, and avoid distractions! The game is immersive yet simple with quick play but it is also very challenging.

You can review your stats and view your top score, average score, the average reaction time in milliseconds, games played and time played. Brainful can be downloaded for free.  You can unlock all of the color themes and remove ads for $1.99. Brainful is also translated in seven languages including; English, Portuguese, Italian, Spanish, Dutch, German and French.

Brainful is available for iPhone and iPad in the App Store and on the Google Play Store for Android.