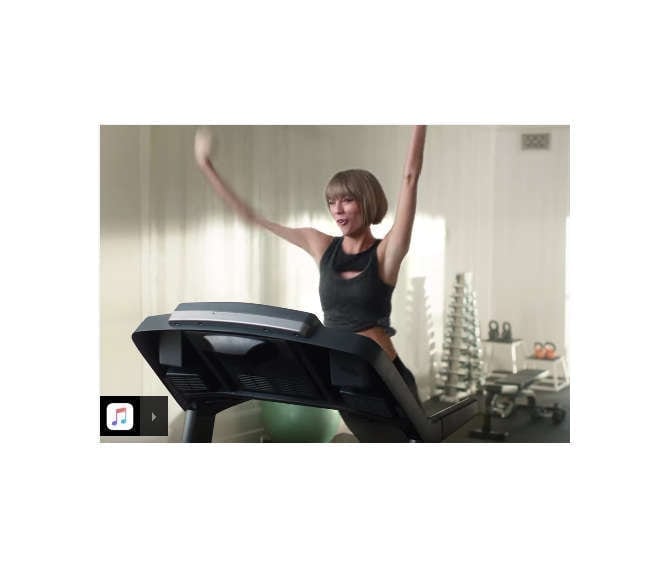 Taylor Swift is featured in the new advertisement for Apple Music. In the advert, Swift is seen engaging in an internal monologue while she is trying to get herself ready for some cardio exercise. Like most of us, she says how much she hates cardio. To this, we say join the club, Miss Taylor!

Miss Swift is seen sporting a full face of makeup as she turns on her Apple Music application on her iPhone. While doing this she also says ‘Activity playlist’, ‘Running’ and then ‘#GYMFLOW’ which she starts with Drake and Future’s catchy song “Jumpman” which is a song from a recent album called What a Time To Be Alive. She selects a playlist that has been created by Apple Music.

Taylor Swift then starts running and singing along to the song. As she knows all the words. She gets really pumped up and runs on her treadmill while she gestures with both her hands as well. Her dancing, moving along with the music, causes her to slip and fly off her treadmill. The scene might have been done by a stunt double and it sure looks painful from where we’re watching. But Taylor still keeps on singing along to the music as she lays on the floor. The tagline for this advertisement is ‘Distractingly good’.

Taylor tweeted the short ad for Apple Music with the text ‘Based on true events’ #TAYLORvsTREADMILL. Now that we do believe! You can watch the advertisement here.

Taylor had a public feud with Apple Music in June 2015 regarding the 3 month free trial period offered by Apple Music to it’s users and whether the artists would be paid during this period or not.

She subsequently agreed to stream her, at that time, recently released album 1989 via Apple Music and a documentary titled 1989 World Tour was also made available on the application exclusively.