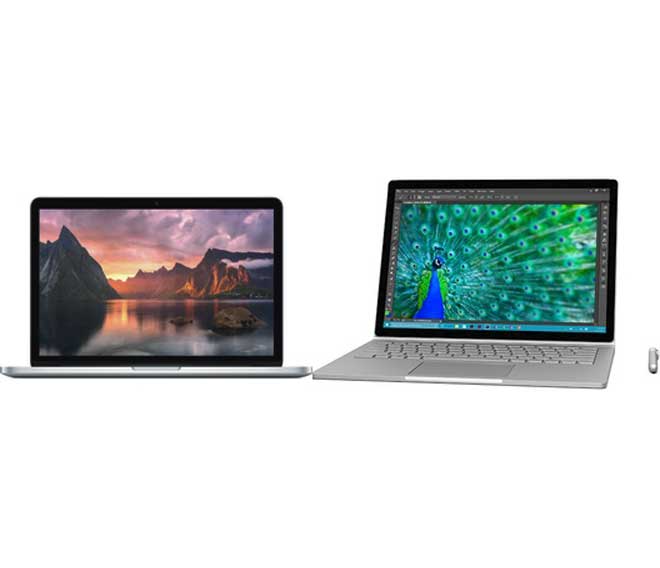 Microsoft has announced a serious contender to the MacBook Pro Retina with the announcement of the Surface Book.  The Surface Book is a true hybrid meaning you can detach the screen and have a touchscreen tablet running on the same OS.  A Mac OS X touch screen is something many Mac users would love to see.  The iPad Pro may resemble a surface Book outfitted with the optional keyboard and stylus, but it is not the same a MacBook Pro. 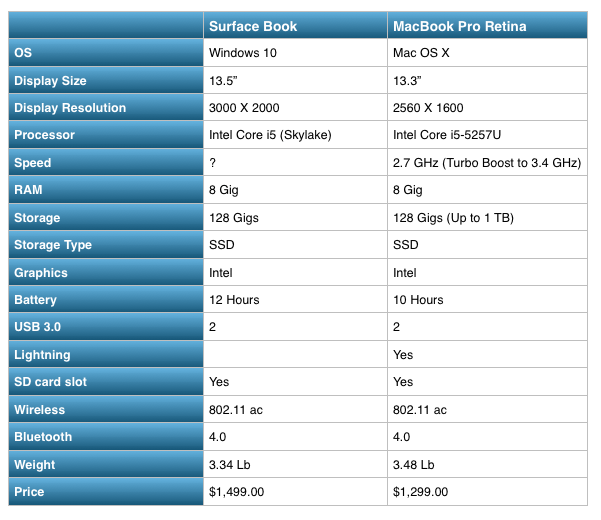 At first look, the Surface Book appears to surpass the MacBook Pro in a number of areas yet they are identical in other areas.  Once the Surface Book is released and independent benchmark tests are performed we’ll know more. Although I really believe it comes down to which operating system you prefer.  Having a real laptop that performs double duty as a touch screen tablet is woefully missing from the Apple lineup. I realize that Apple is reluctant to compete with their line of iPads, but an iPad is not a laptop. I would think that competition within the Apple product line can be avoided by adjusting the price of the entire iPad line and making room for a Mac Hybrid. This would after all be a new cutting edge product and we know that Apple has had extraordinary success with new, innovative, cutting edge products.

As a side note, one problem I have with the current lineup of iPads is capacity on the low end. Personally 16 and 32 gig models should be discontinued entirely and that goes for the iPhone 6s as well.  16 Gigs will not get you very far after installing iOS and a few apps, not to mention HD video.  Why make it likely for the consumer to have a disappointing experience with one of your products? Do away with low storage capacities and improve the experience for all of your customers.

I don’t know what the challenges are in making a touch screen device that works with Mac OS X, I only know that there is a desire to see such a device from Apple.  I also feel confident in saying, that if anyone can do it, Apple can.

We would love to know your thoughts on this.  Please take a moment and provide your feedback below.