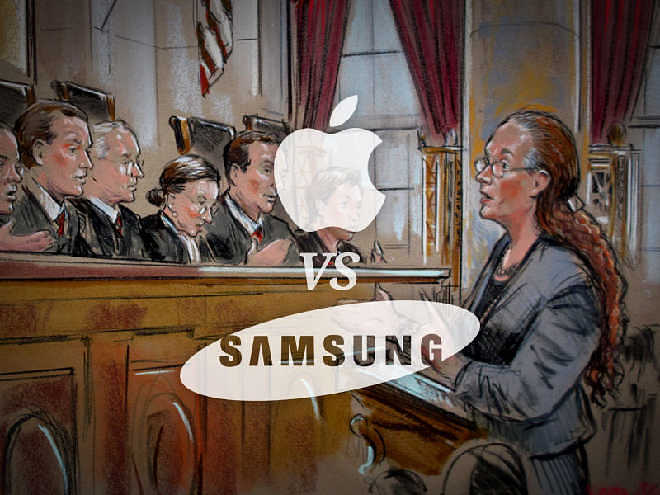 Apple tried to convince the US supreme courts to set aside Samsung’s request for review in their ongoing patent infringement dispute calling the case legally unexceptional. Apple told the Supreme Court that the $548 million settlement does not deserve any review. This settlement between Apple and Samsung was reached back in December. The offer was attached to the condition stipulated by Samsung that if any part of the trial was modified then Samsung would have the right to take back its money. “Samsung’s effort to make this case seem worthy depends on a made-up narrative in which Samsung, not Apple, is the innovator, despite the overwhelming evidence that Samsung copied the iPhone’s innovative design,” wrote the Apple attorney.

Apple is now arguing to the court that it thinks the trial should not be prolonged any further as the issues of the disputed design patents and damages have already been settled leaving no reason for the case not to be closed. Samsung replied that if the Supreme Court does not step in now and have an example be made of this case then this could have negative effects on the technology industry as a whole. Samsung’s case cannot be entirely downplayed as intellectual property. Expert Florian Mueller chimes that Samsung’s argument is relevant to the concerns of the Information and Technology industry.

“If the legal precedent in this case stands, innovation could be diminished, competition could be stifled, and opportunistic lawsuits could have negative effects throughout the U.S. economy,” Samsung said in a statement. It is interesting to note that Samsung’s appeal is most likely to not be heard as the Supreme Court usually does not hear them.

Samsung had filed a petition in which it stressed that the laws were incorrectly applied in the case. After multiple appeals, Samsung ended up having to pay $548 million in damages to Apple. If Samsung is successful in its petition then Apple would have to reimburse the other party. Samsung has stressed throughout that the design of a product like a smartphone has little to do with overall functionality and the device has many other features which determine its real value aside from pure aesthetics.