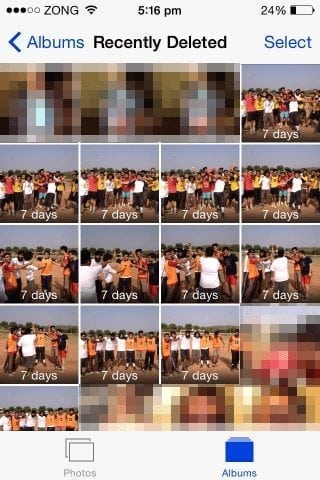 iOS 8 made some significant changes to the Photos app on iPhones and iPads. Besides a much more powerful photo editor, and iCloud synchronization, it included a new ‘Recently Deleted’ album. This album acts as the kind of Recycle Bin / Trash can for photos which you delete from other albums. Photos, instead of being deleted, are simply moved to Recently Deleted from where they are automatically permanently deleted after 30 days.

There is no way to customize how Recently Deleted works. Power users would have certainly liked being able to permanently delete photos, or to decrease the default perma-deletion time period from 30 days to perhaps a week or less.

Power users who have jailbroken their iOS device do have a way, though. There’s a new tweak on Cydia by the name of NoRecentlyDeleted which, as the name suggests, gets rid of the Recently Deleted folder, and instead permanently deletes photos when you delete them from any other album.

As of typing, NoRecentlyDeleted has been submitted to the BigBoss repo under Cydia. It should be available shortly. However, considering it takes a few hours for people to realize we have published something on CupertinoTimes, NoRecentlyDeleted will have been published by then. Simply search for it on Cydia, and you will be able to download and install it for free.