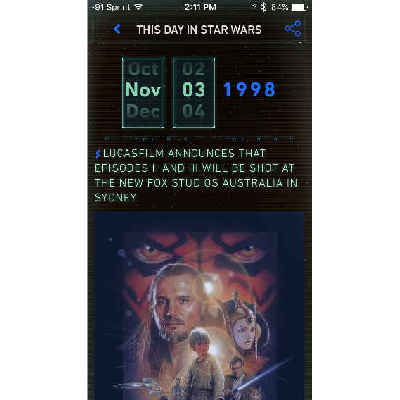 As most of you know, and if you don’t you really should, that the new Star Wars movie will come to theaters this December. It seems as if every single store that I’ve been in has at least, one item from the franchise. I, personally, have been in love with the saga for as long as I can remember. I’ve had about 4 themed birthday parties and dressed up as Darth Vader about 5 times on Halloween. So yeah, it’s a big deal for me to have the chance to watch a Star Wars movie that was released in my lifetime (Return of the Jedi was released in my lifetime, but I was 4 so, therefore it doesn’t count).

Now I really hate myself for this but I did not know that there was a Star Wars app. I was browsing through the App Store the other day and came across a very familiar name. Of course, I had to download it. After downloading, I hated even more for not knowing what I was missing.

The Star Wars app’s interface has to be one of the coolest of all the apps ever made. It is based on the holographic screen that appears in The Empire Strikes Back on the planet Hoth. The things that you can access in the app are phenomenal and it’s  been a blast. 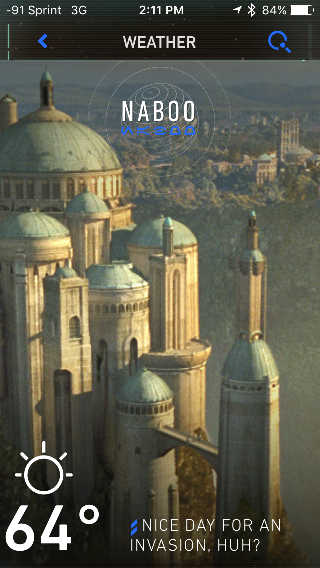 First off is the weather news feed. The weather shows a beautiful, simple design with planet backgrounds. The news feed is separated into 3 parts: official news feed, trending, and today in Star Wars history. The official news feed is self-explanatory. All news comes from the franchise’s website. Trending is based on tweets from Twitter and posts from Facebook. Today in Star Wars history gives you a glance at what event in the overwhelming history of Star Wars happened today years ago.

The app also offers emojis and GIFs for fans to use. The Soundboard is amazing and contains many of film’s most famous sounds such as the I AM YOUR FATHER and the R2D2 scream. It also comes with AT-AT sounds and, of course, the Chewbacca roar. 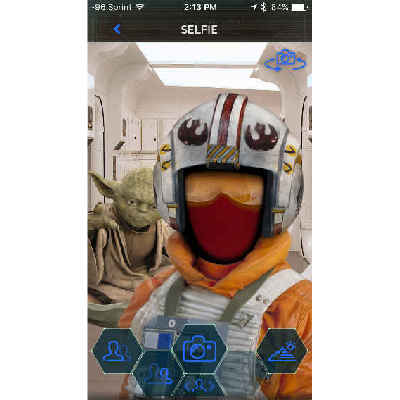 Last but not least, the app allows you to take selfies with your dear friend Yoda as a pilot, Jedi, frozen Han Solo, Princess Leia, and even characters from Star Wars Rebels. So enjoy the app my young padawans and may the force be with you.