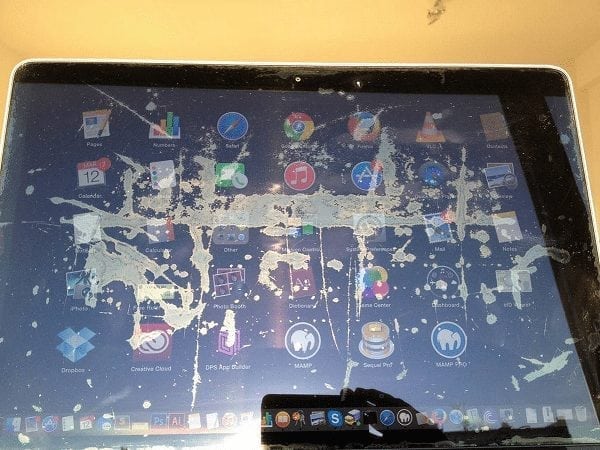 By now you might have heard about what some have been calling ‘Staingate’. Staingate is the latest scandal concerning the Retina Macbook Pro from 2012 by Apple. Getting its name from Watergate like Bendgate did, Staingate is one of the most discussed and debated issue involving Apple right now. We at Cupertino Times also did a piece about it last week. Staingate is the name given to the phenomenon of spots or stains appearing on the screens of thousands of MacBook Pro with Retina Display users around the world.

Models from 2012 of the MacBook Pro with Retina Display exhibit this problem where their screens are suddenly damaged as permanent stains begin to appear on them. Some users have claimed that this may start any time after 7 months of purchase. Many people have expressed that those who are complaining about Staingate might be the ones at fault. It has been suggested that probably users experiencing this problem haven’t taken good enough care of their devices and this may have been caused by using chemicals such as Acetone or products like Windex on the screens of their MacBooks.

While those affected by Staingate have contended that this cannot be the case due to the sheer number of complaints. These are not just a handful of people rather hundreds of users are facing this problem. There are two distinct categories in which these stains fall; internal and external. More about them is explained in the image below. 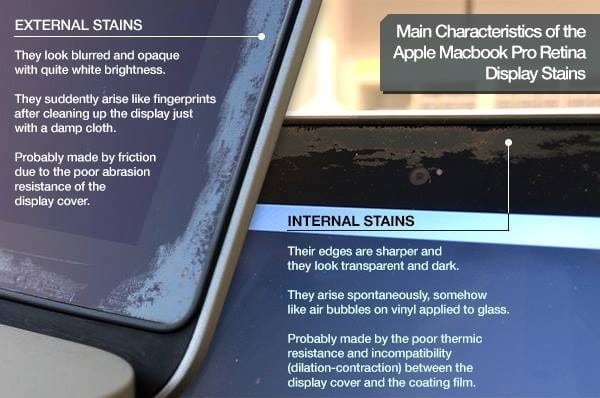 There is also a video which demonstrates the issue. Another interesting source is the 35 pages long discussion on Apple’s official support forum which has seen above of 72,000 views. Even after so much hullabaloo surrounding Staingate, Apple has not made any comments about the issue. So much so that Apple’s amazing Customer Service has defiantly turned down many users’ warranty claims on this issue. The reason for refusal to fix the problem under the warranty according to them is that this is cosmetic damage and as such is not covered by the warranty. To repair these screens, it would cost several hundred dollars.

It is because of attitude like this that Apple has come under fire and has failed to deal with the issue gracefully. As a result, the slighted parties have come together at Staingate.org [NO LONGER AVAILABLE] to raise their voice against the maltreatment they have received by Apple. You can go there to view images of the problem, learn more about it or take part in their cause. Apple should probably take action and cater to their early adopters if they want to continue being the tech giant they are and protect their reputation.