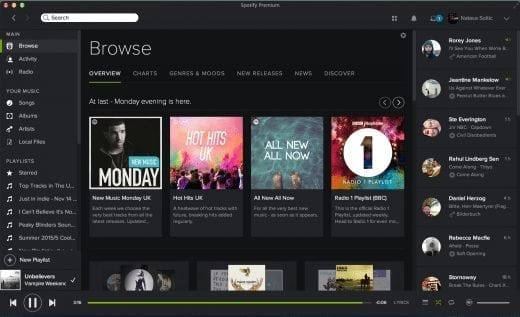 Looking for a new twist to your music listening experience? Now you can sing along to your favorite song with Spotify for Desktop. Spotify has just announced that it will be adding Musixmatch integration to its desktop app to bring you lyrics for the songs you listen to. This way you will be able to view in-sync lyrics in Spotify!

As you all might know, Spotify is one of the world’s most popular music streaming service. It has coupled with the world’s largest catalog of officially licensed song lyrics that is Musixmatch. Musixmatch has grown steadily over the years, and is now being used by a wide array of third-party music services, including Spotify. Spotify’s desktop client will now get the ability to display Musixmatch lyrics in its media player.

How To View In-Sync Lyrics In Spotify With Musixmatch

Musixmatch was previously available on Spotify’s app finder. But it has gotten the official treatment now and is fully integrated onto the service’s desktop client. The client will now get a new Lyrics button in the playing bar that will bring up lyrics for the song that is currently playing.

From within the Explore section, users will be able to search for the lyrics they need. This is very useful as you can use Musixmatch’s search to look for a song you don’t recall the name of, but remember some of the words.

To sing along, you’ll just need to select a song in the desktop app and hit the new Lyrics button. There’s also a new version of Friend Feed which makes it easier to see what other people are listening to. Scrolling down the sidebar shows the playlists, songs and artists your friends are checking out.

Along with the other changes, Spotify has also introduced new daily viral charts which will show the most shared songs in the world as well as in your specific region. It’s also added indicators to all its charts to show what tracks are new and how they’re performing day by day.

According to Spotify, the update will roll out starting today, so if you haven’t got an update for your desktop client, just wait and it will be updated in a few days.

This integration would considerably enhance the visibility and usefulness of both Spotify and Musixmatch. For now, this update is confined to the desktop client, but we are hoping to see it on the iOS and Android apps as well pretty soon.

Do you use Spotify? What are your thoughts on this integration?

Jailbroken? Learn how to get Spotify Premium features for free with BDaySpotify.