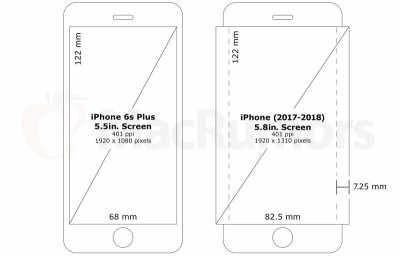 Rumors have been flying about over the possibility of a 5.8 inch OLED iPhone with a wraparound display. If it comes to fruition, this will be a considerable step up from the screen of iPhone 6S Plus. Commentators don’t seem to to be putting much weight in these rumors, however, Apple’s patents in flexible OLED displays could be the missing piece of the puzzle. A wrap-around display would eliminate the bezels on the side and would have functionality in the form of special gesture controls.

Samsung has already put phones on the market which utilize a curved display but it seems unlikely that Apple would follow suit, after all, their whole image is based on being innovators in their field. Apple holds patents that show an edge display that offers virtual button, virtual switches, and informational displays. According to the patent, these buttons have a range of functions from taking a photo to adjusting media volume. It is rumored that these flexible OLED phones could go on display in 2017 or 2018. Flexible OLED displays boast other benefits such as being lighter, thinner and offering better viewing angles. OLED displays also make better color accuracy, image contrast, and screen uniformity possible.

DisplayMates’ Ray Soneira notes, “Because of their very flexible power management capabilities, OLEDs are not only more power efficient than LCDs for most image content, but they now deliver much higher peak Brightness than LCDs because of this. However, for mostly all white screen content LCDs are likely to remain brighter and more power efficient for a while. OLED displays can also be manufactured on flexible substrates, which allows the screens to be curved and rounded like on Samsung’s Galaxy Edge and Galaxy Round displays. Right now the curved flexible OLED displays are protected under rigid glass, but in the near future OLED products will be foldable and flexible.”

These patents can be a clue as to what technologies Apple is looking to explore in the future and with the rumored interest in flexible OLED displays we can at least speculate Apple might feature wrap-around displays on new devices.