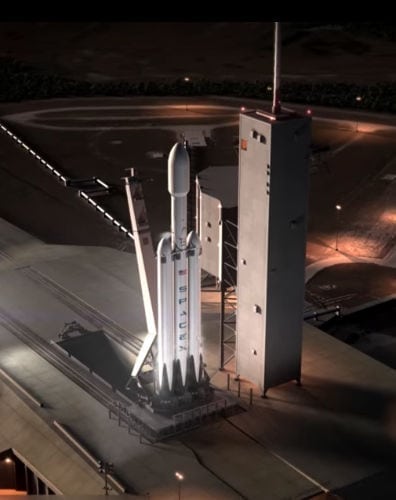 SpaceX recently got the successful launch of the Falcon Heavy under its belt. The company wasted no time after the launch to get back to business and get to achieving the next milestone. There was a routine launch scheduled for this Sunday but it has been delayed and rescheduled for Wednesday, the 21st of February.

The primary mission of the launch is to deliver Paz, an observational satellite from the company’s pad in California. Paz won’t be the only satellite onboard the Falcon 9 as originally thought. SpaceX has taken the opportunity to quietly load two experimental broadband satellites atop the rocket.

Even though Falcon Heavy is the world’s most powerful launch vehicle, it is nothing in profits when compared to Starlink. Starlink is the company’s space-based internet venture. The two broadband satellites Microsat-2a and Microsat-2b are hoped to be the predecessors to a fleet of thousands of broadband satellites.  SpaceX plans to launch thousands of these in the next decade.

No official announcements have been made by SpaceX about these broadband satellites. However, the Federal Communications Commission (FCC) issued experimental licenses to the company giving them the go-ahead to carry out the mission. The company described the two satellites to the FCC as “In addition to proving out the development of the satellite bus and related subsystems, the test program for the Microsat-2a and -2b spacecraft will also validate the design of a phased array broadband antenna communications platform.”

The company has plans to place 4,425 of these broadband satellites in low Earth orbit. These will be between 600 and 800 miles above the Earth’s surface. The company wishes to begin doing so officially by next year. The company wants to make an even larger constellation comprising of over 7,500 of these satellites just 200 miles up and will help in providing high-speed internet access everywhere in the globe.

The license that has been granted by the FCC will help SpaceX in achieving their goal. It has given them a start to studying ground-space communications. In order to provide the coverage that they are planning to offer, they will have to continuously shift the thousands of spacecraft in space as they move around the globe. The company has an ambitious goal to have 40 million subscribed customers by 2025.

In a letter to the FCC in December of 2017, SpaceX’s VP of government satellite affairs Patricia Cooper described a meeting. This included herself, SpaceX President Gwynne Shotwell, and Senior VP Tim Hughes, with FCC Chairman Ajit Pai, Commissioner Michael O’Reilly, and other representatives from the commission. SpaceX thanked the FCC for its support and ensured that progress was being made to provide

“high-speed, reliable, and affordable broadband services for consumers located throughout the US and around the world.”

“I have asked my colleagues to join me in supporting this application and moving to unleash the power of satellite constellations to provide high-speed internet to rural Americans. If adopted, it would be the first approval given to an American-based company to provide broadband services using a new generation of low-Earth orbit satellite technologies.”

We will have to wait for an official statement from the company to see how the launch went and whether the two experimental satellites were a success or not.