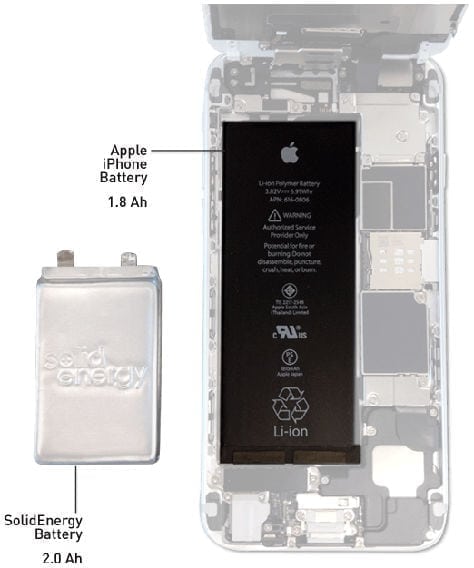 Good news for all of our gadget freaks. An MIT spin-out has come up with the brilliant solution for the most annoying problem ever. Yes, the company SolidEnergy has developed an innovative anode free lithium battery. It is much smaller in size but much stronger in energy capacity as compared to most lithium ion batteries that are in use nowadays.

Same Energy, Half The Size

The battery is developed by Qichao Hu who is the founder of SolidEnergy. The battery is said to be as safe as the current batteries. It is claimed to be long lasting and twice as dense as current Li-ion batteries. Its energy storage capacity is far more than today’s battery giants including those in iPhones. This technology replaces the common battery anode material, graphite, with thin, high-energy lithium metal foil. This has the capability to hold more ions thus providing increased energy storage capacity. Another significant feature is that these new batteries are made using existing Li-ion manufacturing equipment, which makes them scalable.

There has been a lot of research on the use of lithium metal instead of carbon anodes for some time now. For a long time, no one was able to rectify the problem of increased resistance and “dendrite” filaments that form on the anode. This makes batteries short-circuit and heat up. The major breakthrough came at MIT when Hu developed a thin lithium metal foil anode that did reduce battery size considerably. However, it wouldn’t work unless the battery was heated up to 175 degrees Fahrenheit, an obvious “show stopper,” Hu says.

To deal with this problem SolidEnergy developed a solid electrolyte coating for the lithium metal foil that functions at room temperature. Hu also formulated a non-flammable liquid electrolyte with less resistance. This won’t create dendrites when it reacts with the lithium metal. The end result is a battery with the same power as a modern lithium cell in half the size.

SolidEnergy’s innovative journey does not end here. The best part is they have discovered a way to manufacture these batteries with the existing lithium-ion manufacturing machines, which means, unlike many other so-called battery breakthroughs, Hu’s new battery tech could make it into commercial devices relatively soon.

The lithium-metal batteries will be available for drones by November, SolidEnergy says. There are plans to also make them available for wearables and smartphones in 2017, and then smart cars by 2018. We can now wish that manufacturers decide to use this new technology. This will improve battery life of their electronic gadgets so that we can either be more productive or waste more time on these gadgets.