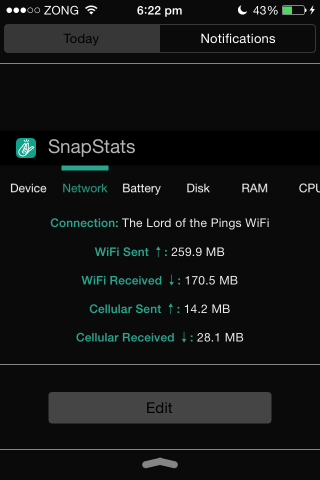 Power users like to stay updated with system-level device stats information, and there is no better way to do it on iOS than through a Notification Center widget. SnapStats is the best free device stats widget for iOS 8 so far. Check it out after the jump.

The main purpose of the existence of widgets on smartphones is to provide information at a glance – glanceable information. Information for which you do not have to dig deep down into. This is why weather widgets, news widgets, data tracking widgets, etc.. In context of this blog post, we will be discussing a free device stats widget by the name of SnapStats.

I feel that the battery tab is a tad sparse, as SnapStats simply displays your current charge level which I can already see in my status bar. It would nice if it showed an estimate of the remaining time, and if the device is being charged, how much longer it will take to fully charge.

I would also appreciate if in the Network tab, SnapStats showed how much data you have used in the current billing cycle so that you can remain vigilant; avoid exorbitant extra bandwidth usage costs.

That’s it! SnapStats is available for all devices running iOS 8. Download it for free from the link below.