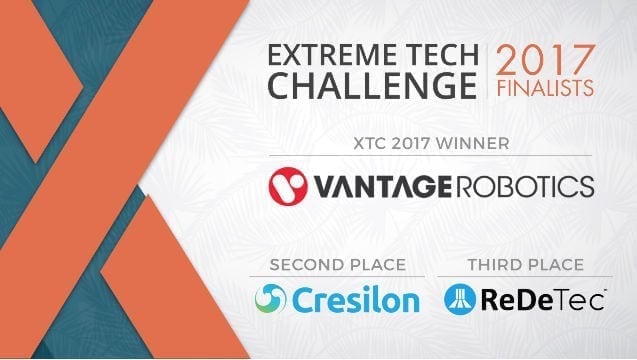 Last week we wrote about the Extreme Tech Challenge and we were incorrect when naming the winner. We mistakenly announced Cresilon as the winner based on the information we had at the time.  This was a tight race to the very end, with the top two finalists racing to a photo finish. The winner was actually Vantage Robotics, a San Francisco startup who we extend our sincere apologies to.

Vantage Robotics has developed what appears to be a hot product known as SNAP. A safe and portable gimbal stabilized flying 4K camera. SNAP follows or orbits your location making for some incredible video shots automatically. It does this from vantage points that would not otherwise be possible. SNAP is incredibly easy to use. It’s safe and takes stunning aerial video and stills. As the winner of the Extreme Tech Challenge, Vantage Robotics will receive valuable infrastructure and support to take their venture to the next level.

Tobin Fisher, the CEO and co-founder of Vantage Robotics said “We’re honored beyond words to be selected amongst such a prestigious group of companies. After working on hundreds of product iterations over four years to realize the goal of true freedom of perspective for aerial video, we feel incredibly grateful to get this level of recognition for our solution from such an amazing group of judges. Thank you to Bill Tai, Sir Richard Branson, the judges, XTC, and everyone else who believed in us along the way.”

Sir Richard Branson took to the stage to deliver his take on the winning company Vantage Robotics and said: “There’s fantastic intensity around the Vantage Robotics team, the judges thought it was wonderful the way they have driven towards simplicity. I personally think the market is very large and I just love the product…and the fact that it’s not going to cut your head off.”

If a picture speaks a thousand words then a video from SNAP must speak volumes. Check out the SNAP video.

Cresilon, a New York startup is the company we mistakenly reported as the winner. They actually came in second place being edged out by VantageRobotics by less than half a percent in point totals.

We wish all three of these companies great success and hope to be reporting on their future developments.