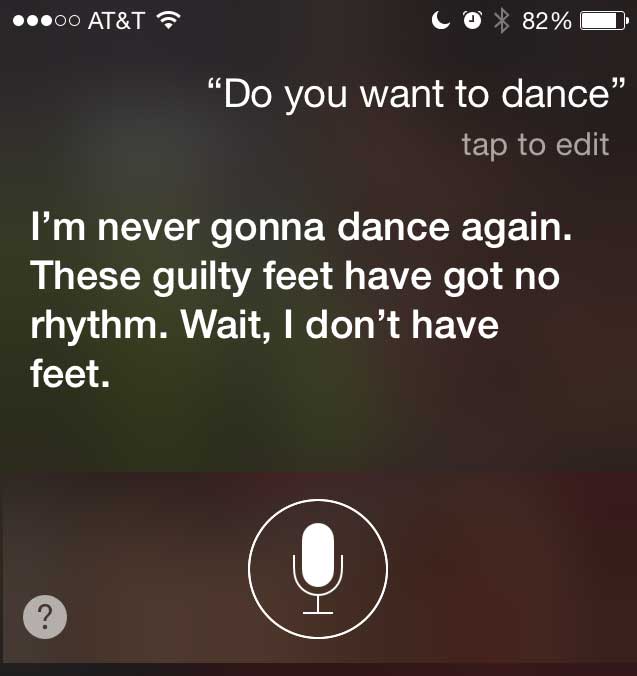 I’ve been fascinated with Siri ever since Apple introduced her to us in 2011. At first I thought she was a novelty but as she has improved, so has my fascination with this technology. I’ve had her older sister, Samantha on my Mac for years for text-to-speech and to vocalize alerts. Samantha lacks the AI of her younger sister and pretty much just says what you want her to. (If that were only true in real life)…just kidding honey.

It’s no secret that Siri is a great source of info on the fly.  Want to know the score of the Yankee/Boston game, the weather in Beijing, the chemical composition of cellophane, how many days till the winter solstice? What date does Thanksgiving fall on this year? How far is the moon?, Who was the US president in 1928? Why is the sky blue? all answered quickly and correctly by Siri.

Siri does not vocalize all of her responses but she is very well read. The list of sources Siri uses to provide data on the fly is ever growing with Google, the Weather Channel, Wolfram Alpha, Wikipedia, Yelp, Rotten Tomatoes and Shazam at the top of a growing list.

I’m disappointed that it doesn’t look like Siri is coming to the Mac just yet. The closest thing is the improvements to Spotlight in El Capitan.  This could be a prelude to Siri, a robust digital assistant finally making it to the Mac—hopefully sooner rather than later. According to other sources I’ve read, Siri should make her way to Apple TV as well.  My guess is that the new Apple TV will be released before Christmas (I hope so).

It’s no secret that Siri has a great sense of humor. Just ask her things like; “Do you want to dance?” and you’ll likely get a response like, “I’m never gonna dance again, these guilty feet have got no rhythm.  Wait, I don’t have feet”.  In fact, if asked the right questions, Siri could do standup—she can be that funny.  Living in Las Vegas, I’d like to see Apple book Siri into Caesars Palace for a promotional appearance prior to her becoming available on our Macs. These days the strip is dominated by billboards promoting DJ’s so Siri would be a welcomed attraction in my opinion.

Apple launched a Siri website back in April that gives you a thorough look at what she’s capable of. As her capabilities grow I’m sure they will be documented on her website, so check it out. http://www.apple.com/ios/siri/