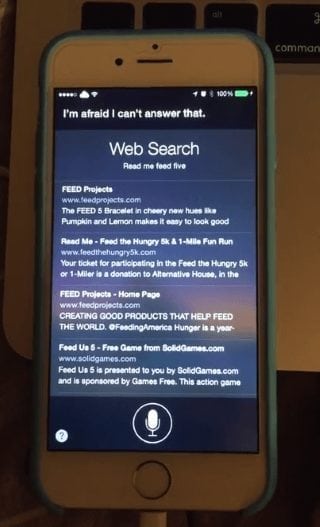 Sireader is a Siri RSS reader for jailbroken iOS 8 devices. It has an interesting story behind it, too! Check it out after the jump!

Over on Reddit’s jailbreak subreddit, a blind jailbreak enthusiast posted a $1000 development bounty for an RSS reader which would allow said enthusiast to listen to RSS feed items, after activating through Siri using their voice.

Less than 24 hours later, developer Codyd51 came up with a sneak preview of a Siri-based RSS reader for iOS. It is quite rough at the moment – given that it received no more than a couple dozen hours of development time – but it is only going to get better, especially seeing how it is receiving so much positive feedback from the reddit r/jailbreak community.

Or “read feeds starting at 10” so I don’t need to hear them from beginning.

The jailbreak tweak has been previewed on video. You can see the developer activating his implementation of a Siri-based RSS reader, and then Siri reading a feed item. That is all it does at the moment.

You can see the video embedded below:

The developer is yet to actually get the $1000. Either the blind jailbreak enthusiast has chickened out (unlikely), or he just hasn’t gotten around to checking r/jailbreak yet (likely).

Those of you who are interested in getting Sireader (tenative name) will have to wait a bit until the developer is able to polish it for public use.

We will definitely cover Sireader when it is released on Cydia. Until then, marvel at just how great an invention the Internet is. A blind person made a request for a software from one corner of the world, only to have it fulfilled in less than 24 hours. Thanks, Tim Berners-Lee!