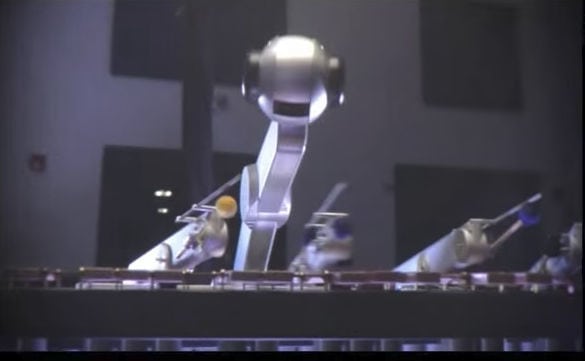 A while back I thought about writing a piece on this robot musician from Georgia Tech named Shimon. I am now finally getting around to it. But first here’s some background. I spent the first part of my life as a professional musician. A drummer specifically.  One of the things I always cherished about those years was playing with musicians that not only had chops but understood the importance of listening to each other. Certainly, there are times when precision and playing like a tight ensemble were expected and appropriate. But there are also those times when comping and the interaction it leads to between musicians is the most exhilarating and rewarding experience. These were the days before sequencing, sampling and drum machines.

When MIDI was introduced it seemed like music was losing its soul. Trios became duos and most recording session work for drummers went to drum machines. I survived and kept playing all through the eighties and nineties. In recent years there has been a fair amount of research focused on the development of robotic musicians. At first, this appeared to me to be a novelty. I’ve watched four armed robotic drummers pound out pedestrian beats. It was cool to look at but it was no better than a preprogrammed sequence. Then I discovered Shimon and other projects that bring a whole new light to the marriage of technology and music.

Professor Gil Weinberg from Georgia Tech is both a musician and an expert in robotics.  He is also the creator of Shimon. There are a number of robotic musicians out there but most are simply running their program, playing the notes exactly as they are programmed to play them.  Shimon is different because of its ability to “comp”.  Comping is a term used in Jazz that means to compliment what is being played by the other musicians in the ensemble.  Chords, tempos, rhythms, harmonies, harmonics, and counter-melodies can all be complemented which is a basis for improvisation.

The Robotic Musicianship Group at Georgia Tech is a group of musicians who share the goal to further develop musical interactions between machines and human musicians. This leads to novel musical experiences.

A robot has a lot going for it. It doesn’t make mistakes, it can do complex mathematical computations quickly and easily, and it never forgets what it learns.

Professor Gil Weinberg states; “In our research, we combine computational modeling approaches for music perception, interaction, and improvisation, with novel approaches for generating acoustic responses in physical and visual manners. The motivation for this work is based on the hypothesis that real-time collaboration between human and robotic players can capitalize on the combination of their unique strengths to produce new and compelling music.

Our goal is to combine human qualities such musical expression and emotions with robotic traits such as powerful processing, the ability to perform sophisticated mathematical transformations, robust long-term memory, and the capacity to play accurately without practice.” Referring to the Google Talk from March 2015, Professor Weinberg goes on to say,  “The talk will feature a number of computational approach for improvisation using genetic algorithms, hidden Markov models, and fractals which were implemented in 4 different robotic platforms: Haile  Shimon  Shimi and the robotic drumming prosthesis.”

This Ted Talk will give you some more background on this technology.

The “robotic drumming prosthesis” was of particular interest to me. Drummer Jason Barnes lost his right arm below the elbow in an accident.  A devastating blow to a young drummer.  Jason approached Professor Gil Weinberg and asked if they could design a drumming prosthesis for him.  Professor Weinberg took up the challenge and the results were amazing.

Drumming is all about the grip. How tight or loose one holds the drumstick affects the bounce of the stick on the drum head or cymbals.  There are many variations of this. The problem was to make a prosthetic extension that behaves as if there were fingers connected to a hand. Then connected to a wrist and finally to the arm. A very difficult task but the team at Georgia Tech was able to create a device that allows Jason to drum once again. Jason now travels with the part human, part robotic band. His dreams were realized through the technology that made this happen.