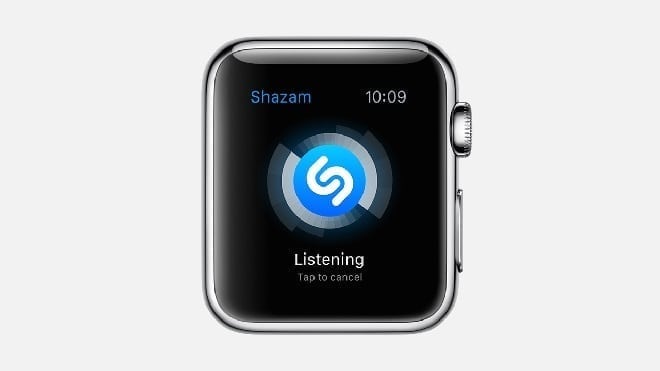 Expectations are mounting as the Apple Watch nears its release date. For the most devout Apple fans, this will just be another accessory they have to have. But for the majority of us out there, justifying the price is much more important. Apple has been trying to give people a reason to choose it over other smartwatches. And here’s another new addition – Shazam for Apple Watch!

Shazam is the popular music identification service that has, to date, been used to identify over 15 billion songs. The app captures a piece of a song that’s playing, creates an acoustic fingerprint, and then checks it with a central database to identify it and send back relevant metadata such as title, artist name, album, date etc.

Shazam was among the most demanded apps on the Watch platform, alongside Spotify for Apple Watch. After all, wouldn’t it be cool if you could just hold up your wrist to a sound source to identify a song instead of whipping out your phone and opening up the app? Simply holding up your wrist is much more convenient.

Now, it has been revealed that Shazam is coming to the Apple Watch. The Watch has an in-built microphone for handling voice calls, so the app can take full advantage of that. You can activate the app with a single tap, which will automatically launch the listening mode. With Shazam for Apple Watch, you can;

Since every Apple Watch is paired to an iDevice, Shazam has introduced a ‘Hand-off’ feature that lets you buy songs on iTunes, watch videos, and much more.

The Apple Watch will start to hit the stores on the 24th, and we reckon this is one of the first apps you need to install. You can install it using the Apple Watch app on your iOS device updated to version 8.2.

What do you think of this new way to Shazam? Leave your responses in the comments section below!